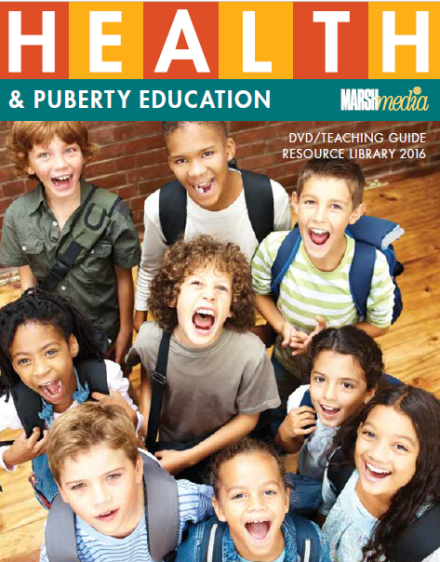 Today I would like to talk about the company MarshMedia. This company produces health and safety videos which can be streamed online for the school system, and now they are reaching out to the homeschool community. They have even put together a homeschool special.

Who is MarshMedia ~ MarshMedia is owned and operated by  Dan and Brenna Witcher. They create health and safety videos that are purchased by the school system in the United States and a few other countries. The programs are geared toward kids in kindergarten through eighth grade. There are also a few programs that are for adults (teachers) to prepare for a crisis. MarshMedia  covers a large variety of topics. There are 54 videos to enjoy. Each program runs about 15 minutes. They are well known for their puberty videos.
Each video is rented and streamed for 24 hours. You can watch the video more than once during that 24 hours.

How We Used This Product ~ I watched several of the videos without my children. I found most of them to be fun and educational. They are very clear and engaging. I decided to watch the video created for teachers to be prepared for a school shooting. When I worked in the school system 19 years ago in the wake of the Columbine High School massacre, the schools across America were just starting to create policies for dealing with a school shooting. At the time, I thought some of the policies were crazy and I was curious to see if they had changed. Indeed, the video was very well done and the survival techniques that were taught were much better than when I was working in the school system. I thought that the advice was sound and that the program was presented in a thoughtful way.

I also had my teens watch a few of the videos. They were most interested in the video about AIDS. They had learned about AIDS previously and felt that the video was engaging and informative. My kids were less interested in the puberty videos; because they already knew all of the information, since they are a little bit old for this series. However, I did not see anything offensive about them. By the way, they really did not discuss sex education. They also skimmed through a few of the videos for younger students and thought that they were funny and would teach young kids a lot. They liked that many of the programs were animated and felt that young modern kids would really relate to them.

If you are interested in using this product, they are providing a great homeschool special. This is their lowest price ever, and it is only for the homeschool community. Considering the rather steep cost of these programs normally, this is really a huge deal.

To see what others had to say about this product, click on the banner below.