In My life ~ The stress this week was more manageable than last week. I am thankful for that. We still had a host of doctor appointments to get through, and I am patiently waiting for a call back from the Duke doctor on what to do next for Goldilocks. I know that my endless To Do list will become more manageable with time. It is just hard right now because we had to put so many things on the back burner, while we sold the old house, bought the new house, moved and renovated. Now, everything seems to be the priority, and I need to just take it one day at a time.

Presidents Day ~ We had so much fun with our annual Presidents Day scavenger hunt. We hid the first 25 presidents, which brought us to the turn of the 20th century (right where we are in studying American history). This year we did activities or listened to a story at many of the stops in our scavenger hunt. This helped tame the wild running and screaming we have experienced in past years. For example, they built a log cabin for Abraham Lincoln and listened to the Declaration of Independence for Thomas Jefferson. 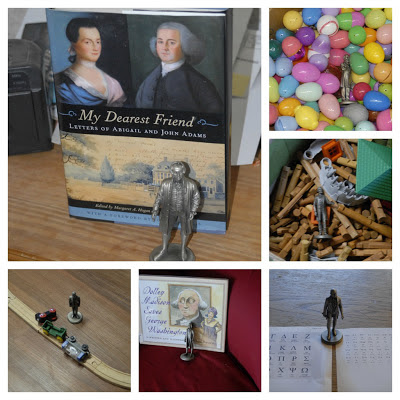 Key to Photos, clockwise ~ John Adams standing next to a book filled with his and Abigail's love letters; Rutherford Hayes is in a pile of Easter eggs, since he started the first White House Easter Egg Hunt; Abraham Lincoln, who was born in a log cabin; James Garfield, who could write in Greek and Latin at the same time with his right and left hands; James Madison standing next to his famous wife Dolly; Franklin Pierce, who struggled with deep mourning for his son who died in a train accident during his presidency.

All The Rest ~  The kids start extra rehearsals this weekend!! They will be performing in Swan Lake before we know it. In addition, the aerial arts class that my daughters are in will be holding its own show. Each of the girls will be doing their own solo. They are very excited and busy picking their songs. Unfortunately, there is some trouble brewing with another classmate. A boy in the studio is bullying my son. So far, I haven't caught him red handed, but my eyes are on him and he knows it. The studio is aware of it, too, and seems to be on our side. If you have a child on the autism spectrum or with social awkwardness, I highly suggest the book New Social Story Book. This book is helping my son so much. We are working our way through the chapter on Bullying this week.

A Picture To Share ~ My kids love the balloon artist at our local health food supermarket. He is always there for the Kids Eat Free night. He accepts only donations for his art, and the kids are even adding some of their own coins in each week.

Email ThisBlogThis!Share to TwitterShare to FacebookShare to Pinterest
Labels: Friday show and tell, Friday wrap up