This week has been filled to the brim with fun! The weekend started with a patient appreciation party at Goldilocks' orthodontist's office. They had tons of fun, from face paint to moon bounces. The doctor's office brought in a food truck where everyone could get free dinner and lots of junk food. I let Tom Sawyer have cotton candy because it did not have any allergens (except food coloring). Even so, he still seemed wild the next day. That was probably the first food coloring he has eaten in the last year. Daddy had several races with the kids through the moon bounce. Goldilocks was moving around so fast, I didn't get a single decent photo of her. LOL!

The next big event was Father's Day. We drove a few hours from our home to Bay Mountain Park. What an awesome park! We will definitely go back to this place. It had a planetarium, zip lines, boat ride, nature preserve, nature center, low and high ropes obstacle courses and miles of trails. We were very impressed. On this trip we saw a wonderful show at the planetarium about how to become an astronaut. The kids really enjoyed it. We also took the scenic barge ride and saw many wild deer and birds. It was a great tour of the lake. We enjoyed seeing the nature preserve and trying our luck at the low ropes course. I am not sure the ropes course was our forte! It was really hard. There were wild deer everywhere. The wild deer walked through the parking lot and ropes course within just feet of us. It was thrilling to see them so close up.

The rest of our week was filled with Tom Sawyer being at Mayan Boy Theater Camp. This week was the first of two weeks that he gets to enjoy this camp. He has swung on ropes (aerial arts), acted out Mayan battles, built a Mayan village out of clay complete with tiny figurines, played tons of games, and made tools and shields (just to name a few activities). Each week of camp has a giant Mayan feast and pool party on Friday. He has had a blast!! My job this week was to make certain he had enough safe food to eat at camp (he is still grain and nut free most of the time). I only managed to take pictures of two of his lunches for this week. They were basically made out of organic lunch meat around cheese sticks, chocolate pudding, grapes, chips, yogurt sticks, dried fruit and cucumbers. For the final feast, we contributed homemade, grain-free Mayan cinnamon brownies, Mayan quinoa black bean salad and a pound of rib-eye steak for the boys to roast over an open fire. Each family was supposed to contribute a hunk of meat and a side dish, so it was a huge feast and a great success.

The girls have had swimming lessons each day. They really loved the swimming even though it has been a bit chilly and it rained buckets on them one day while they were in the pool. They are doing well.

The rest of our week was consumed with electrical issues in our home. Our contractor friend was due to help us grade the yard this week (to stop the flooding in the basement) but ended up spending an entire day working on our electrical outlets (a few were arcing) and replacing some very poorly wired lights in the laundry room. We are glad to have a much safer home now. There will be a bit more work by an electrician over the next few days. I have always feared house fires and look forward to our home being as safe as it can be. Tom Sawyer built a house out of popsicle sticks and then burned it down. That is the only house fire I am up for witnessing! 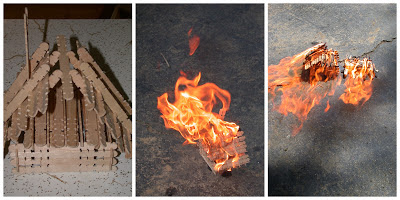