O Is for Organizing, Occasion and On One's Own

Organizing ~ Our week was a whirlwind with very few photos taken. We started a host of house projects in which only one has currently been completed (ahem!). We are busy painting the guest bedroom/office. I am sure by next week I will have pictures to share of that accomplishment. The big surprise that interrupted our painting was a gift from the dance studio that our children attend. The studio was throwing out a ballet bar that they had used for more than 40 years. The kids really wanted it, and I told them they could have it before I realized it was 11 feet long! Fitting it into our family room meant redesigning two rooms and moving a host of furniture around. However, it worked out great, and the kids are thrilled to have for their very own a piece of their beloved dance studio. Dean said, "Mom think of the history and amazing dance moves this bar has seen." The change in our family room is not completely impromptu. We have been discussing for some time how the family room was only being used for Lego building. The other activities planned for that room, such as sewing and movie watching, just were not happening. Also, when we bought this house, we had to lay a new floor in the basement and had extra padding put under it so it would be safer for dancing. I then impulsively bought a huge sofa at a thrift store and that took away tons of space for dancing. The inheritance of the dance bar certainly forced our hand to make the space work for the kids' true passions.
Learning Occasion ~ We had our homeschooling review with another homeschool family this week. Because my kids have been studying the Narnia books series, we had high tea for our evening meal and presented some of what we had been learning.
The kids presented their study of The Lion, the Witch, and the Wardrobe. They also talked about the other books they have studied in the Narnia series. Dean also showed off his robot that he has programmed to do all sorts of cool things. Anne performed her dance that she has been choreographing. She will be performing it as a solo in the dance showcase that is coming up. They both showed the twins how to swing dance. The twins presented their study of the Book of Kells. 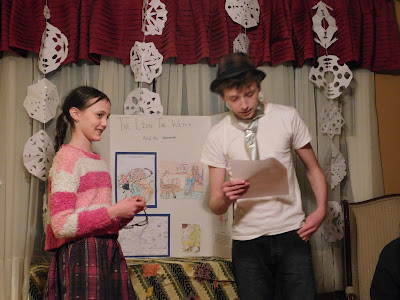 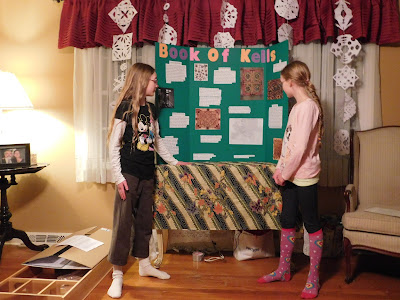 On One's Own ~ Anne really wanted to do a solo in the upcoming showcase. She approached the director and asked if she could do one. The director asked her to show her music and what she had choreographed. Anne only had a little bit of the dance worked out but showed it to her. She was granted a solo and has to show the completed dance on Monday. Anne has choreographed and practiced her dance for over 15 hours this week on top of all of her normal dancing classes and practice. I am really proud of how hard she has worked for something she really wants to do. Her dance looks great. It is a lyrical and she is dancing to Shatter Me by Lindsey Stirling. 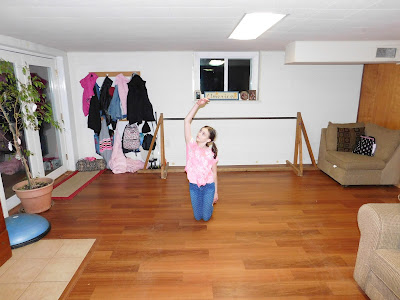 Blessings, Dawn
Posted by Dawn at 5:24 AM