I'm reviewing The Climbing Knights,  one of four SimplyFun new releases. I am so pleased to have the opportunity to review this game. What a great board game it is! We were immediately impressed with the materials used to make the game. The box itself is strong enough to last for years to come. The game is extremely sturdy and well built, being manufactured out of a thick, high-quality cardboard. The pieces are durable, so I have no doubt they can be assembled over and over again without wear. I was also impressed with how easy assembly is. My daughter had it all put together in just a few minutes. The game is 29 inches tall when it is fully assembled. It is also a breeze to disassemble and fit neatly back into the box. I found the directions to be uncomplicated, so we were off and playing in no time. 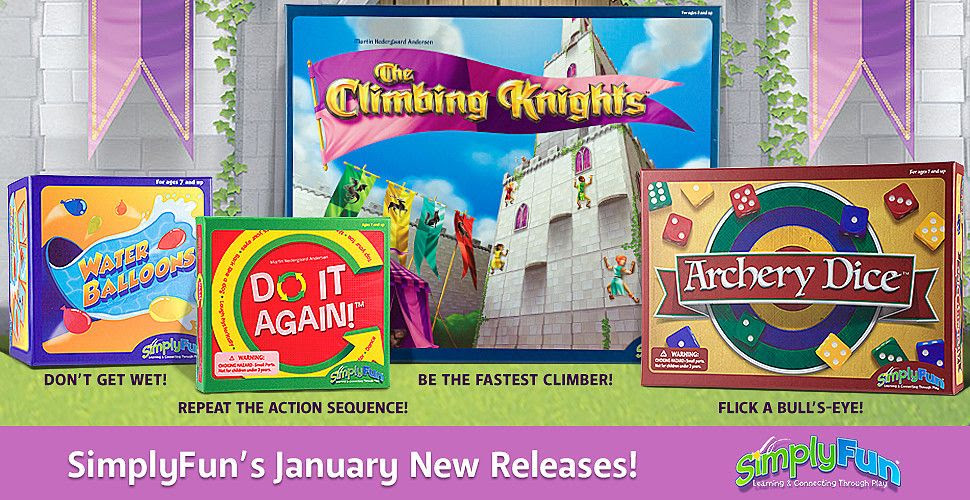 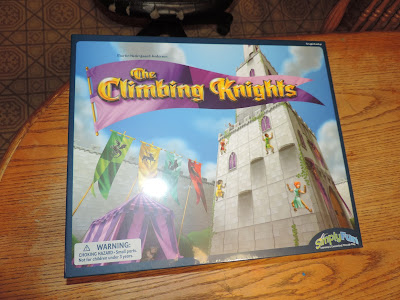 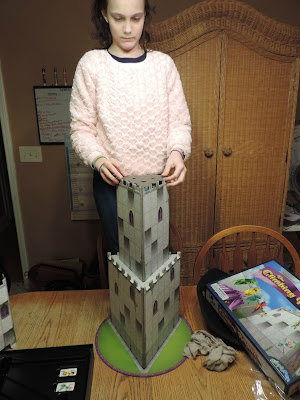 This game is all about strategy and spacial reasoning. Spacial reasoning is the ability to think about objects in a three-dimensional way. People who work at developing this skill will eventually be able to imagine how an object would look if it were rotated. They will be able to manipulate 2-D and 3-D objects in their heads. This skill helps people in many careers, such as engineers, urban planners, computer scientists, industrial designers, cartographers, sculptors, tailors, carpenters, graphic designers, mechanical designers, navigators, physicists, and architects -- to name just a few.

Each player is a knight who is trying to scale the wall of the castle and avoid the guards. It sounds easy, right? Not so -- there are ledges to hide under and windows to move around! But watch out -- with each roll of the die, the guards are able to move and may be able to see you. So you have to keep thinking about what is the safest move with each turn and what future moves the guards may be able to make. If the guards see you, down the wall you fall. Are you wondering how the knights stay attached to the wall? The knight figures are magnetic. Isn't that cool? They stick very well to the wall. My son, who has a tremble in his hands due to cerebral palsy, was easily able to place the knights and make them stick. This drastically increased his enjoyment of the game. I really appreciated the way the designers of the game did such a good job making the game work smoothly. My son Dean (13) said, "This game has really nice mechanics and rules." He especially likes that one of the die choices put the guards to sleep. Anne (12) said, "I like the concept of hiding from the guards and figuring out how to avoid them." Anne must really like the game, because she has asked to play it every day for six days in a row. 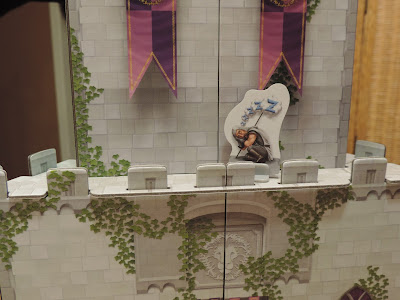 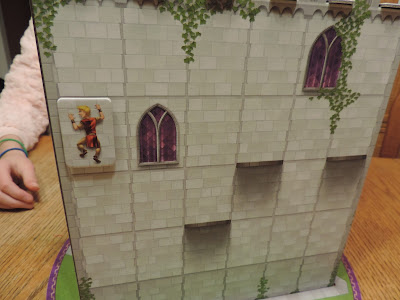 In addition to the game being straightforward in setting it up and in breaking it down, it is a relatively quick game. The directions say that the game takes about 30 minutes. We found that it only took about 20 minutes with two people playing. However, when four people played, it took closer to an hour. The extra length of time is probably due to some of my more strategy-driven children thinking through their moves longer than most would.

We are a family that plays games almost every night, especially during the fall and winter months. I would highly recommend this game as an addition to a family's collection. It is fun, easy to set up, and challenging enough to keep kids and adults engaged.