Our first week of school was a little different than I had planned but still successful, thanks to planning. The dance intensive that Anne and Dean attended this week proved to be, well, INTENSE. Both children were pushed out of their comfort zone, and Dean in particular really struggled. It is often very lonely being the only boy in a sea of dancing girls. Also, the ballet class was especially hard this time around and caused my perfectionist, highly-critical son a great deal of stress. They came home each day with a friend who needed childcare. So, we did get some additional school done, but not as much as I had hoped to complete. They were just too tired by the time they got home. Thankfully, they really love their dance lessons, even when it is really hard.

One thing I love so much about homeschooling is sharing wonderful stories with my kids. This week was filled with stories. We wrapped up our summer reading, A Tree Grows In Brooklyn by Betty Smith (1943). I loved this book as a child and was happy to finally share it with my youngest two. I waited to share it with them for years because it has many mature themes -- poverty, alcoholism, honesty or lack of in marriage and a near sexual attack on a minor. It also has many positive themes about family togetherness, importance of education, rising above struggles, saving and managing money, value of hard work, and sacrifice. It was a perfect book to complement our recent trip to New York City and the Tenement Museum. We hope to watch the movie in the next few days.

A second story this week is the new Harry Potter book, Harry Potter and the Cursed Child. We attended the Midnight Release party at Barnes and Noble on Saturday. Anne and I attended with two of her best friends, twins whose birthday happens to be the same as Harry Potter's. The girls were so excited to be out that late at night. The party attendees were sorted into Hogwarts Houses. Anne got into Gryffindor, much to her delight. 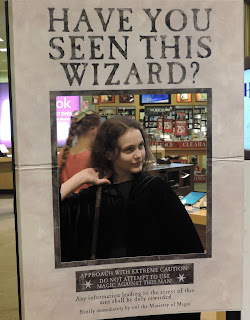 We are enjoying the book. It is a play and the kids are learning more about keeping up with listening to a script being read by one person. We should be done with it in the next three days. (Well, I stayed up very late last night to finish reading the book, but we won't tell the kids. HA HA!)

The third story of the week was the original version of A Chorus Line. Anne is watching at least eight musicals this year as part of her music appreciation course. Once again, this has some mature themes; but since Anne is so interested in a career in dance, the movie was an irresistible choice. We watched it together and she loved most of it.

The last story of the week was the movie, Fame. The kids sang and danced to "I Sing the Body Electric" at the intensive this week. They came home wanting to see the entire movie. We decided on the 2009 version. Fame will count for Anne's music appreciation course. Anne enjoyed seeing both movies in one week. They were a good comparison of the joys and struggles of following a career in dance. I appreciate that, so far, Anne has "kept her head" about a career in dance. She realizes that it is hard work and that very few end up on Broadway, in a large traveling dance company, dancing on a famous cruise ship or being a Rockette. Thankfully, she has always been family-oriented and doesn't really want dance to be the only thing in her life. She is content, so far, with more obtainable goals --such as being a dance teacher, dancing in a small company, and maybe owning her own dance studio some day.

We also started science this week. We reviewed density, atoms and molecules. We did six different density experiments from the book, 150 Captivating Experiments, and covered the first chapter in Real Science 4 Kids Chemistry. 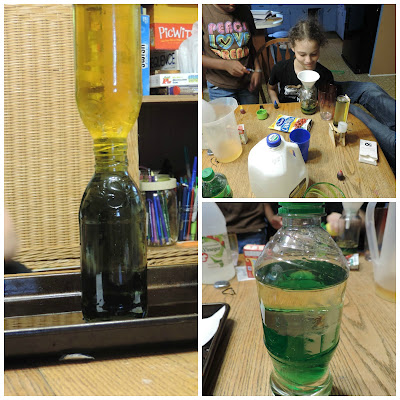 We had a good first week back to school. We will have to double up on math next week, since we didn't do any this week.