My kids live for this week. They look forward to it all year long. It is Nutcracker week. The kids are living and breathing the life of a dancer at the theater. They are growing and stretching emotionally and physically. It is amazing to watch them. I overheard Dean telling Anne that he didn't feel one bit of stage fright. It just felt so natural to be on the stage. She agreed. Remarkably, she has never felt any stage fright since she was 3 years old. They just march out onto the stage and do their thing. Dean has some crazy fast costume changes this year. He has one that is less than 60 seconds. We figured out how to lay out his costume in the wings so that he could make it back on stage in time. So far, he has made it on time through the first two shows. They have four parts each and two more shows to go.
This year is different for me because I haven't been back stage much. They were ready to be independent and do it on their own. They may have been more ready than I am...ahem! They have handled themselves perfectly without any issues. I am very proud of the wonderful young people they are becoming.
Anne has wanted to be an elastic doll since she was 7 years old. She is thrilled to finally be one of the lucky teens to do this dance.

She is also a guard and a street sweeper.

Here are a few shots of them on stage. The shots are a bit blurry, but I am happy to have the photos anyway.
The other huge thing that happened this week was the devastating fires that burned Gatlinburg and Pigeon Forge. As I mentioned before, there are many fires raging in our area. Gatlinburg is not that far from us and was struck by winds as high as 90 miles per hour that whipped up a relatively small wildfire, which rapidly grew into a monster inferno. Much of the city was lost in a matter of hours, and the death toll is currently at 13, with many still among the missing. Our hearts go out to all that lost their loved ones, jobs, pets and homes. The devastation is unbelievable. It is surreal that we are living such normal happy times less than 80 miles away from this huge disaster. We feel so blessed to be safe and sound. We are also so blessed that we got a bit of rain this week with more in the forecast. We are a long way from being out of an extreme drought, but the rain will hopefully put out the fires and help the fire fighters. Hopefully, there won't be any more crazy wind storms. 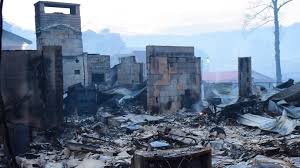 Blessings, Dawn
Posted by Dawn at 5:42 AM