It is tech week here. The kids start performing eight shows of The Little Mermaid tonight. This week has been filled with making sure we have everything organized for the show. There has been last minute shopping trips for crazy things like tape that can stick your nude leotard to your skin so it doesn't move. Anne doesn't get to dance much with her friends and has struggled with sitting out big portions of classes for the last several weeks. Most of  Junior Company have the role of mermaids, but she has a lead role of being the princess who marries the prince at the end of the show. There are sometimes disadvantages to being in a lead role but much excitement, as well. Dean is in the group of dark water dancers (they drown the people on board the prince's ship) with his jazz class, plus has a small character role as the priest. It will be a different experience for them with much more solo and duet work on the stage. 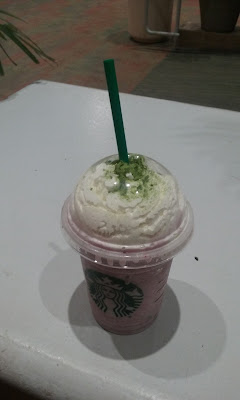 We just had to get the Starbucks Mermaid drink which is on their secret menu. They whipped it up for us, and we had fun taste testing it. It was very good.

The rest of the week has been filled with struggling though a family cold. I seem to have it the worst, which is for the best since the children need to perform no matter what. We canceled out of some of our school time with our homeschool friend. However, we did do a few hours of fun science with her. We learned about the rock cycle and then made the rock cycle using Starburst candies. We chopped our Starbursts into sediment and then we pushed them together just a little bit to make "sedimentary rocks." Then we squeezed them a lot to simulate "metamorphic rocks." Lastly, we melted them on a hot plate and let them cool into "igneous rocks."

We are basically done with all of our subjects, except for needing a bit more math and science. Anne has a little more home economics and Dean has some more english. We plan to push hard and finish next week. Then they will do their end-of-year testing the week after that. We also have several reviews going at the moment. Hopefully, we will finish up this hard year strong. Sometimes just perseverance is enough.

Blessings, Dawn
Posted by Dawn at 6:33 AM