Week 5 ~ The Old Lady, the Mouse and the Princess

Irma blew into town as a rather old lady, but she was feisty and determined to destroy all that she could until the very end of her days. She raged about our town, knocking down trees and power lines, leaving many in our county in the dark. She was a force to be reckoned with even in her dying days. Unlike so many who had met her before us, our family was left mostly unscathed. She brought down a great deal of dead branches on our property and made driving very hard for a day or two, what with so many street lights out of order. However, we have no complaints and are blessed to have come through her bluster unharmed.

The rest of the week was calm in comparison to Irma but still filled with some excitement. I went out to run a few errands one day and returned to find that my teens had caught a mouse in our dining room! Not only had they caught it, but they had placed it in a my largest cooking pot and fed it all kinds of lovely nuts, celery and bread! They also named him Alfred. While they were cooing over their new found friend, I studied what diseases Alfred could be carrying and plotted the demise of his potential siblings who were likely lurking somewhere in my home. Alfred moved to the woods, much to the kids dismay, and the house has been laced with toxic mouse treats. Hopefully, our unwanted guests will have moved on soon. 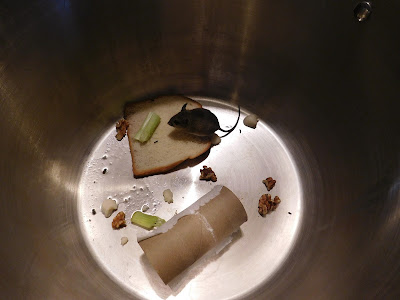 Lastly, this was a stellar week for Anne. She was picked to be the princess in the performance of The Nutcracker and The Mouse King. Our dance theater follows the original story of The Nutcracker by E.T.A. Hoffman which you can read about here. There is a story within a story and Princess Pirlipat is one of  the pinnacle characters of the within story. Anne is delighted to get this main character role, which has been reserved for adult dancers in the past. The role doesn't interfere with many of the other junior company dances, so she will get to do several other characters in the Nutcracker as well. The family celebrated with a small cake from Whole Foods. 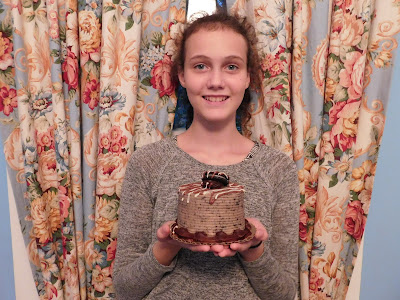 The rest of the week was uneventful. There was a family cold to contend with, lessons and appointments. Dean is the sickest at the moment, and the rest of us are in different stages of recovery. Hopefully, we will all feel well soon, since we have some very exciting events planned for next week.

Blessings, Dawn
Posted by Dawn at 8:54 AM