We just got back from our great Deep South adventure. We spent six days on a road trip that took us through five states (two of which were new to all of us) and three hotels. We decided to make reservations right before leaving home for our hotel in New Orleans but searched for deals online for other hotels on the road. When we got tired of driving, we looked for last minute deals at booking.com. It worked out great and we saved hundreds of dollars by snagging last minute deals. We even got to stay in a mid-range hotel for 28% off in the French Quarter. This will become our new way of travel for sure. Tim (our oldest son) decided to stay home. He hates long car rides, and the planned activities didn't seem worth the headache of travel to him. Grandma did come with us.

Day 1 ~ We started our journey by traveling to Montgomery, Alabama where my husband was born and lived for a few short months of his life. We had been here once before when the kids were under 6 and they remembered very little. We only stopped for a few hours to break up the drive. We had a lovely dinner of delicious pizza, took a walk in the park and harassed the fire ants. Dean was enamored with them, since we don't have them in the mountains. Before leaving town, we decided to stop by The Southern Poverty Law Center to take a photo of the kids' hands in the Civil Rights Memorial fountain so we could compare this photo to the one I took of their little pudgy hands in the fountain from our last trip. We continued on until we were tired and stayed just outside Mobile, Alabama.

Day 2 Easter ~ In the morning, we got up and traveled to Biloxi, Mississippi. I had planned a day at the beach knowing that most things would be closed for Easter. We enjoyed a few hours exploring the beach and the Gulf of Mexico. The kids had seen it before from the Florida side when they were very young and barely remembered it. Dean really missed the crashing waves of the Atlantic Ocean. The beach wasn't very crowded and the public bathrooms/changing rooms were open, much to our delight. 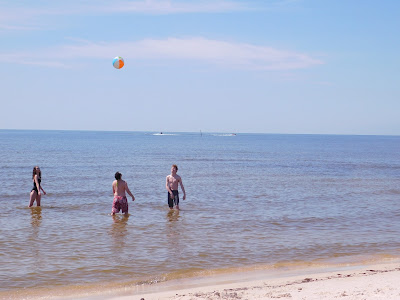 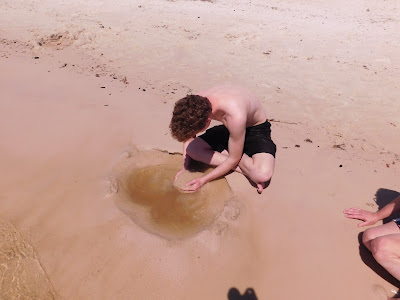 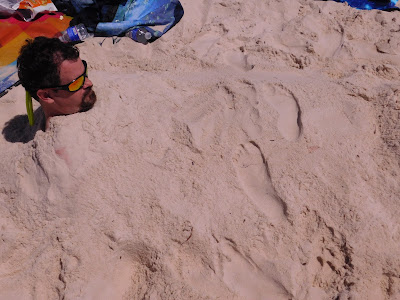 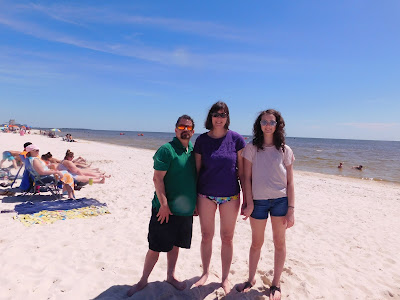 After three hours of play, two sunburned guys despite putting on sunscreen every hour, and very hungry children we packed up and headed on. We could only find fast food or very fancy restaurants open in Biloxi so we settled on Wendy's. We arrived in New Orleans, Louisiana in the late afternoon. We gave up our mini van to the hotel valet because parking is impossible in the French Quarter and settled into the hotel. Then we headed out to explore the French Quarter and find dinner. 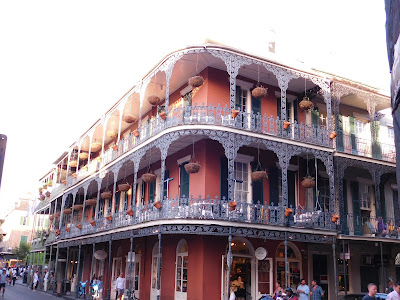 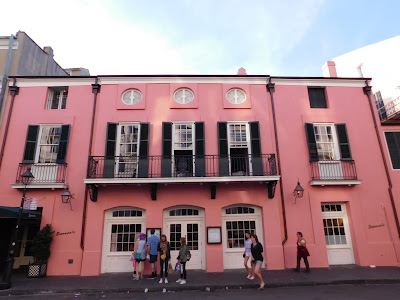 Most of us picked appetizers to save money and leave room for dessert. We found them plentiful and hardy. By the time we finished dinner, darkness had descended on the French Quarter. We found the night life to be robust but not overwhelming. We headed for Cafe Du Monde where there is always a line but well worth the wait for the best beignets in the French Quarter, so they say. We waited in the take out line for about 20 minutes and had wonderful melt in your mouth beignets. (For future reference ~ they come three to a bag for $3. We only needed one a piece.) 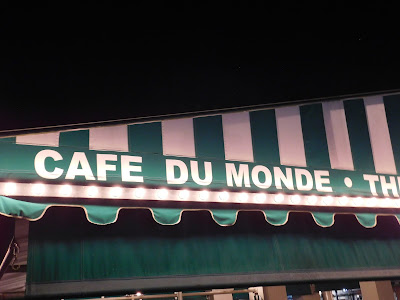 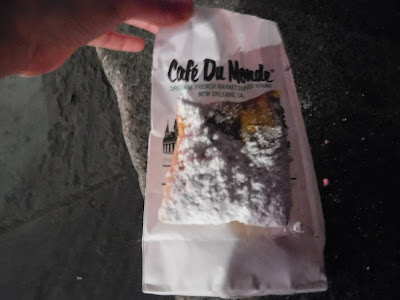 We wandered back to our hotel taking photo opportunities when we found them. 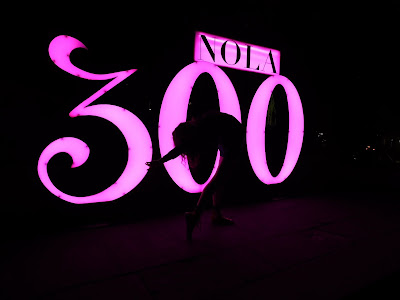 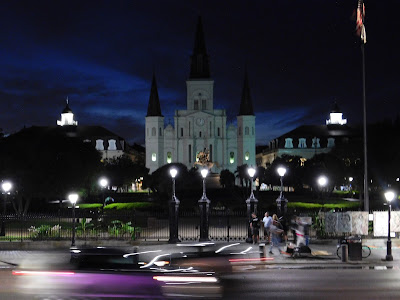 Day 3 ~ We decided to go on the steamboat Natchez. We purchased the tickets that included lunch so that the kids could try many of the foods famous to New Orleans in an all you can eat buffet. We tried gumbo, jambalaya, red beans and rice, fried catfish and bread pudding. Anne, who is not a fan of seafood, lived on fried chicken, salad and French bread. Once we ate, we went out on deck and listened over the intercom to the history lesson about the Mississippi River, how to identify the nationality of the cargo ships passing us and the history of the steamboat. We also visited the engine room and stood behind the paddle wheel. 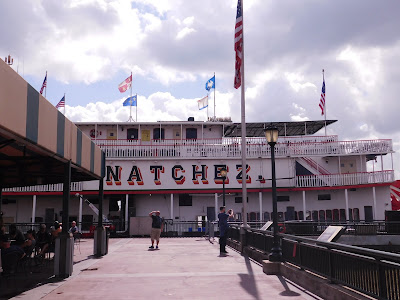 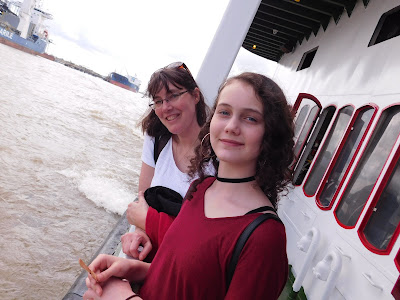 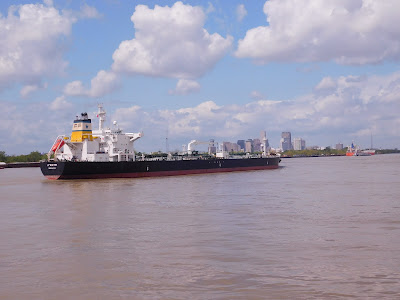 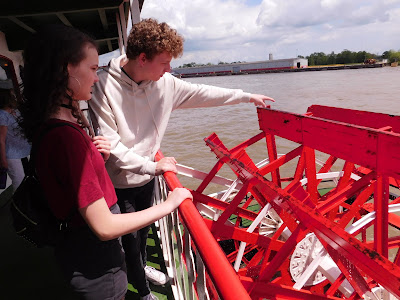 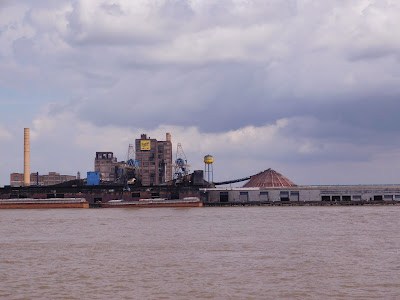 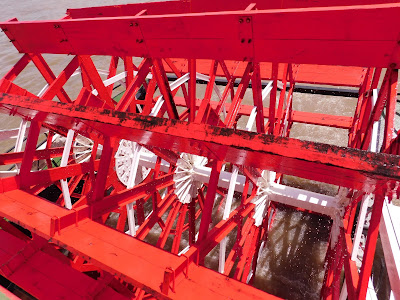 We spent the evening riding streetcars around the Garden District and getting ice cream. Unfortunately my camera died right at this point in our vacation. I should have brought a back up. My cell phone takes awful pictures, so I used my Mom's cell phone for the rest of the trip. I need to borrow her phone to download the pictures. I will have to post about days 4 through 6 later this weekend in a separate post.

The kids have now seen 16 states (32% of our nation). I don't think we will meet my original goal of seeing all fifty states before they grow up, but we are making progress. Maybe we will get to 50%.

Blessings, Dawn
Posted by Dawn at 5:46 AM