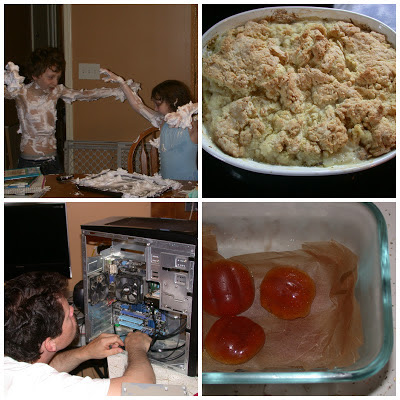 This was not one of our stellar weeks. Some weeks we just put one foot in front of the other and do the best we can. We started the week off with many flooded streets around town caused by the massive rainfall over the weekend. It was a bit hard to get around town. By Tuesday, kids started getting sick and developed symptoms that seemed to indicated strep throat and a stomach virus. However, they tested negative for strep, and the doctor thinks they have a cold that mocks strep which is going around. Tom Sawyer and Little Red Riding Hood have spent much of the week in bed doing "bed school". Then on Wednesday the computer decided to get sick, too! Poor Goldilocks had to give up on computer school since our only remaining computer is a vintage little notebook and can't support Time4Learning. I am really impressed that the little notebook is letting me get this post up!

Books We Read ~
Movies We Watched ~ We watched a 4 hour documentary called Destination America this week. It was very interesting and looked at immigration to America from the 1700's to present day. The kids also watched some PBS kids and PBS cooking shows.

Tom Sawyer ~ Tom Sawyer (11) had a physical therapy evaluation last week and the results are back. I took him in for an evaluation because he still can't ride a bike and complains about pain in his upper back much of the time. She found that his core and hips are very weak. The therapist was surprised he was able to sit up and walk as well as he can. I felt bad that I hadn't taken him in sooner. I just had no idea that all of these little symptoms were indicators of poor core issues! When he was a baby and toddler, he had physical therapy every week. However, that PT said he didn't need any more help, so he has gone for years without any physical therapy.  Here are his symptoms, in case you have a child who needs to be checked out.
He starts physical therapy in two weeks. Until then we have a few Superman exercises to do. We will not be signing him up for swimming lessons this year. I explained to the therapist that he had needed rescuing multiple times by lifeguards during lessons in the past few years. Because he was always so cold and blue when they got him out, I had him checked for cardiac issues. She said that was also symptoms of core issues!! I am so glad we are finally getting him help.

Goldilocks ~ Goldilocks has been pretty strong this week. When her siblings are down and the schedule is different, Goldilocks tends to have more issues. She is bummed that the computer is down. She really prefers being educated by the computer, rather than schooling with me. She is also nervous about round two of braces. The orthodontist is trying to figure out why one tooth won't come in and whether she will need surgery to get it in position to come through. She had special x rays this week. The dentist and orthodontist are deciding what to do next. While they were in her mouth, they found an abscess in another area. Now she needs to swish her mouth out with salt water or hydrogen peroxide three times a day and see if it clears up.

Next Week ~ We are praying that everyone feels better in the next 24 hours. Next week is my husband's vacation, but we can't go away overnight. The kids have technical rehearsals almost every night. They will be performing in Swan Lake in a matter of days. Since our nights are so busy next week, we plan on doing a few day trips or special outings in the area. My husband is also hoping to do lots of yard work. We have just two more weeks to this school year. I'll be posting our summer plans soon. We will be continuing with lessons instead of a summer break. However, there is some extra special fun planned in between playing catch up.

I am joining Homegrown Learners.