What a chilly week. That song that has the line "the weather outside is frightful" seems to be permanently stuck in my head. We are starting to reach more normal temperatures around here. We plugged along better than many. We only lost power a few times for less than 20 minutes each time. Also, only the 1970's addition to our house ended up with frozen pipes. The 1950's part of the house (which houses our two bathrooms) did just fine. So we carried water down the hall to do dishes, cook and generally keep the kitchen going for 2 days. The pipes thawed without breaking and all is now well. It could have been much more difficult and I am grateful it worked out so well.

Homeschool Lessons ~ We started back to school this week. I was pleased that we got off to a fresh start and everything was smooth sailing for the first 3 days. Thursday was a little bit shaky, but we still got most of our lessons done. The kids and I are reading Out of the Dust and studying the dust bowl period in American history. We are starting a mini unit study on Dorthea Lange. The kids will be doing photographic portraits with my old camera next week. We are also listening to We Are the Ship (about the Negro League in the 1920-30's) while we are in the car. This is a nice complement to Tom Sawyer's chapter book on Jackie Robinson. Little Red Riding Hood is working her way through Kit's Story Collection. She really learns lots of information from the American Girl Doll books. Goldilocks is busy doing her own thing in literature. She just finished Tales of the Fourth Grade Nothing and is moving on to another Harry Potter book. They are all making progress in the Three R's, using their Complete Curriculum Flash Kids workbooks. We also started watching 1940's House on DVD. I can see that this show is going to help us spring into World War II. Tom Sawyer already wants to build a bomb shelter in the back yard!

We did some experiments to test out the frigid weather this week. We were successful at making snow out of boiling water. We threw the boiling water into the air. Also, we tried making frozen bubbles, but they didn't work well for us. Maybe, my homemade bubble solution wasn't quite right. 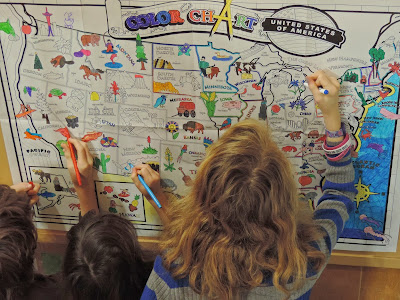 Boomer ~ had an accident at the end of last week. He was running across the yard and stepped on a glass plate. Yes, I, too, would like to know why there was a glass plate in the backyard. The plate broke and a piece flew up and cut an artery in his leg. I have never seen so much blood in my whole life. The children were WONDERFUL! They followed my commands perfectly and we got Boomer into the car with lots of towels. Goldilocks did an excellent job holding deep pressure on his leg while we drove to the animal hospital. We must have been a sight when we arrived at the animal hospital because people cleared the way for us! The children and I were covered in blood. Thankfully, we were right there when he got hurt, the kids were quick to follow directions and the animal hospital is only 2 miles away! Boomer is fine. Now, if I can just keep him from pulling his stitches out for one more week, this ordeal will be over. To say the least, the cost of this emergency swallowed up any and all extra money for the month, which leads me to Melissa's challenge... 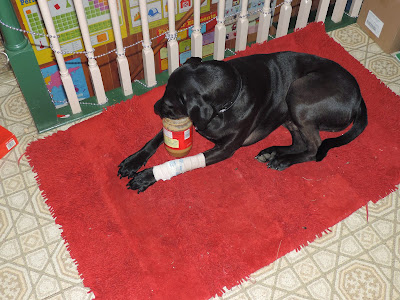 Not Buying It ~ We are doing the best we can to not spend anything extra this month. Besides the dog's emergency, we had to pay our property taxes on the piece of the side yard we had to buy last year from the previous owner who had separated it from the main property and that holds our septic system). So our finances are almost frozen. We do not have cable TV, smart phones, or other luxuries often thought of as standard in America society. We do have a Kindle Fire and the one DVD at a time plan with Netflix. I wasn't sure how much more we could cut. The first 10 days have not been as hard as we suspected. I did have to buy a special measuring dipstick for our underground oil tank. We sure don't want to run out of bio fuel with the current temps outside. Also, I purchased a protective case for our Kindle at a store that was going out of business. It was marked down to $6 from $49.  I just couldn't pass up that deal. It is a very hardy case. Other things we did to save money this week.
So we saved $138 this week!

Blessings, Dawn
Posted by Dawn at 7:43 AM