Friday Wrap Up ~ Art with Grandma

This has been a pleasant and smooth week. However, not a very picture worthy week since  I discovered I had only taken four pictures before our art class with Grandma today.

Art with Grandma ~ We learned about Maria Martinez (a famous Native American potter) and a little bit about the Pueblo Indians. We learned about Maria Martinez's techniques and how her husband painted the pots she made. We then learned how to make a coiled pot using a plastic bowl as our guide (mold). They came out great and the kids stuck with this project for a long time. When the bowls dry in a few days, the kids will paint them with acrylic paints. 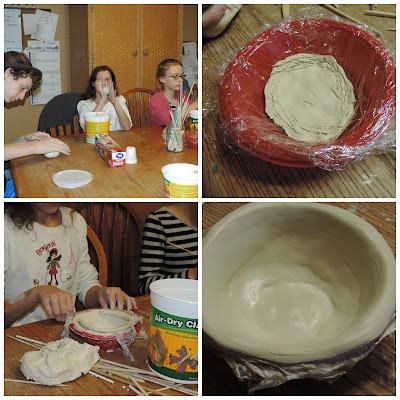 Dance ~  Dance went so much better this week for Dean. He enjoyed both of his classes and is finding his way through the mass of girls. He is one boy in a class with 15 girls. He is still disappointed that no other boys have joined the Tween Company, but, fortunately, the girls accept him since most of them worked with him last year. He is really enjoying the creativity and collaboration in the classes. Anne loves dance as always. She is finding that pointe hurts and is glad that the teacher will be teaching it slowly. Despite the increase to seven hours of dance a week, she doesn't seem at all tired. 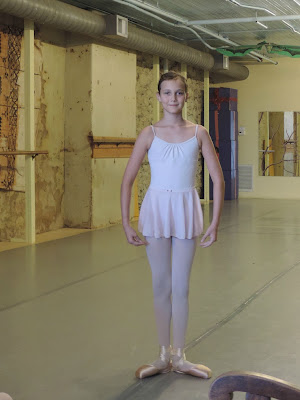 We are almost done with a quarter of the school year ~ We finished our ninth week of school today. Report cards (my kids demand them) come out next Friday. I can't believe we will have completed a fourth of our school year next week! Time flies.... I am in finish-up the quarter mode around here, since my brain works well with goals, lists and deadlines. I want to be done with Genevieve Foster's Augustus Caesar's World by the end of next week so we can move on in our survey of world history. That will be a feat if we accomplish the book. We go off on so many conversational rabbit trails. I know it is all good learning. I just struggle with my goals, lists and deadlines type of brain. If we are going to finish the book, we will have to set something else aside. I don't like that idea much, either. Oh well, we are not yet behind in any of our other studies.

Update on Goldilocks and school ~ I attended the first school meeting for Goldilocks this week at the high school! Talk about time flying! Goldilocks is struggling (my word). I consider a child struggling when he/she has multiple F's on school work/tests and is pulling barely C's for overall grades. However, the schools said she is doing great. She also feels that she is doing great, especially since she has a few friends. That is what is truly important in her eyes. I can see that. I thanked the high school for giving more realistic grades -- unlike the school last year which gave her straight A's the entire year, despite her insistence that she didn't know what subjects she was taking. She got A's in classes that she wasn't aware she was even studying. For instance, you could ask her how she was doing in science and she'd tell you that she didn't think she had a science class. At the end of the school year, she failed every single end of grade test (these tests are scored outside of the school system). I guess she knew what she was talking about. They passed her on to ninth grade anyway. As I have stated before, I am less than impressed with the school system. I was hoping that they would improve her chances for a successful future, but I now suspect that they are NOT going to do anything except pass her along.