A Good Week with a Few Bumps!

We have had a good week with a few bumps. I suppose that could be a statement for most weeks. Monday and Tuesday were rough, homeschool-wise. We just couldn't get into our groove after the excitement of sledding and the snowstorm. Everything was much harder than necessary, and we had our fair share of clashes. Fortunately, we were back on track by Wednesday! Then Thursday night Dear Husband's car died for the third time this month and left him stranded at work. We are going to have to have it towed back to the shop ... once again.

Art ~ We learned about gilding and Renaissance art this week with Grandma. Our favorite twins came over to join in the learning. After looking at slides of various gilded paintings from the Renaissance and also watching an excellent video lesson from Khan Academy, we tried our hand at applying gold leaf. It is harder than it looks but lots of fun. I didn't get many pictures, since I was busy trying not to turn into Midas with gold leaf all over my fingers.
Experimenting with Buns ~ Anne asked me to try creating a new hair bun for her this week. So I split the hair over and over again with tiny rubber bands until it forms a bun-like spiderweb. It came out pretty good for our first attempt. 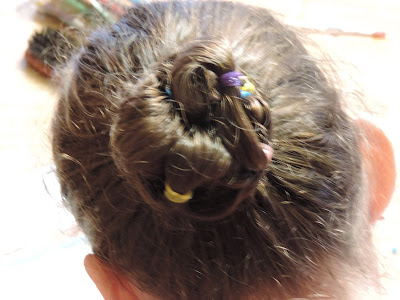 Science ~ We ran a few more science experiments this week. The most popular was burning iron. It is always fun when fire is involved in science, right? We also spent a morning doing a scavenger hunt at our city's small science museum. Dean worked on the senior high school/freshmen college student scavenger worksheet. It was hard and he needed help several times. The kids both earned their prize (more gems for their collection). We are excited to see how much our science museum grows this summer when it moves to its new physical space. They are supposed to triple their size and staff! They also plan to be much more hands-on and increase their education programs. I can't wait!

Games ~ This week was no different from last when it came to board games. We just love them! We learned two new games this week. My eldest son, Tim, received Settlers of Catan for Christmas and taught it to us. We also received The Climbing Knights board game that I will be reviewing for TOS soon. The kids had lots of fun with it, too. Additionally, we played Statego, Uno, 10 Days in Asia, and Pay Day. 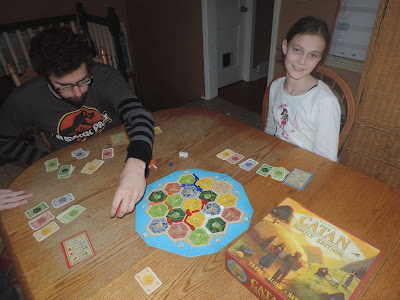 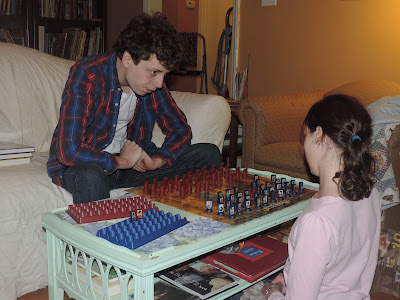 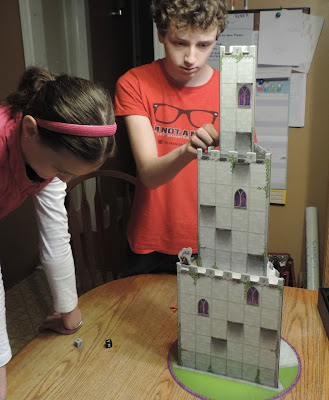 The Rest of School ~ Despite our very bumpy start this week, we did accomplish most of what I set out for us to do. Here are a few of the highlights. We are halfway through The Voyage of the Dawn Treader (literature). We are almost done with Life of Fred Kidneys (math), and I had to go out and buy new math workbooks in fractions to reinforce the concept of fractions before we move on. We are actually beyond fractions, but I really noticed a gap in their learning recently so we are backing up until we get it right. We are deep into our Elections Lapbook, which I will be reviewing for TOS soon (history). Dean completed his reading comprehension book and moved on to Vocabulary for the Gifted Student workbook, and Anne is plugging along with her reading comprehension workbook. They both completed two more spelling lessons (language arts). We made it to all of our out-of-the-home classes, despite the weather ~ Yay! So it was another good week.

Last Thought ~ I find one of the things that is truly lacking in our society is kindness. So many people are rushing around and thinking only of themselves. It is an especially sad thought, because I supposedly live in one of the top ten happiest cities in America. Of course, I am assuming that happiness equates kindness which I suppose is a stretch. However, I wish everyone would focus on teaching their children and themselves to extend a greater level of kindness on a daily basis. This week, I witnessed an elderly woman in a crowded aisle at Walmart struggling to pull a large box off a bottom shelf with her cane. I told Dean to go help her and he offered his services to her. She very gratefully accepted and thanked him repeatedly. All the older women in the aisle were beaming about what they had witnessed. Later, a few aisles away, two women who had seen him help the first woman started smiling when they saw him and commenting to each other about his kind act. It struck me that he had done such a simple act. It took him far less time than it took me to write this paragraph. However, it had a lasting impact on several people. Unfortunately, it had a lasting impact because it was seen as unusual, instead of the norm. We are living in a country with so much bitterness, hatred and despair splashed across our news feeds every day. Isn't it time to turn the tide and unite our country in love, peace and kindness? We owe it to our children and future grandchildren.

Blessings, Dawn
Posted by Dawn at 5:05 AM