We spent a few whirlwind days in New York City this week. It has been a dream of ours to take our youngest children to the city for years. We took our oldest 16 years ago. We finally made it back with the younger ones! I am going to break our trip down into events and post them over the next few days. I also hope to do a "What I Learned" post about traveling with my special needs crew in New York City.  This time my husband and I visited New York City with my stepmother, oldest son Tim, Dean and Anne.

Today I am going to talk about Central Park. Everything about New York City is huge and Central Park is no exception. It is 843 acres and stretches 2.5 miles long by half a mile wide. There are tons of winding pathways so that you can wander for hours upon hours in the park. We entered at the southwestern end, which was originally designated as the children's end of the park. The park has statues galore, multiple bodies of water, great lawns and winding paths through woods, boats and bikes to rent, 21 playgrounds, and a small amusement park, carousel, zoo and castle. It is an amazing oasis in the middle of a city that never sleeps. We visited a little more than one-third of the park. I just can't describe the size and scope. It is amazing!

Central Park was designed by Fredrick Law Olmsted and Calvert Vaux in the early 1860's. They used many of the natural rocks in the park to make wonderful landscapes that everyone loves to climb on. 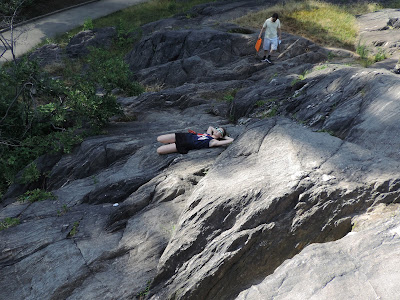 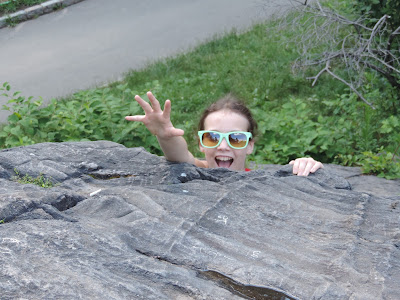 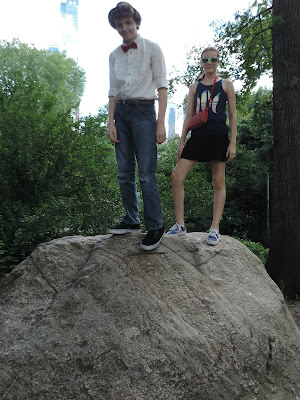 The carousel in Central Park is from 1908 (although there have been four carousels over the years since 1871). We had a great time riding on it. The boys decided to ride on the stationary lounging bench. 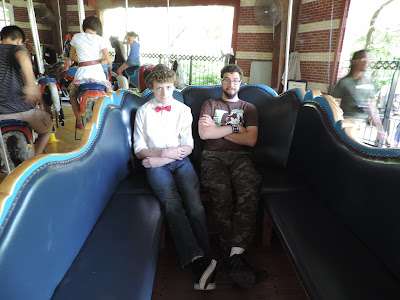 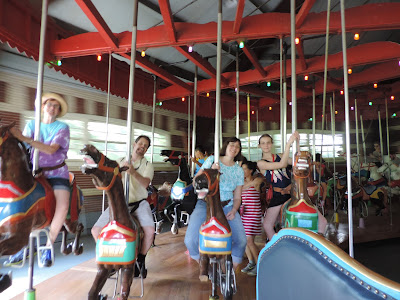 I enjoyed taking pictures of a few of the bridges. I love bridges. We walked for several miles through winding paths and over bridges. 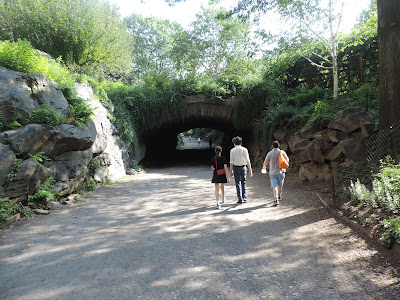 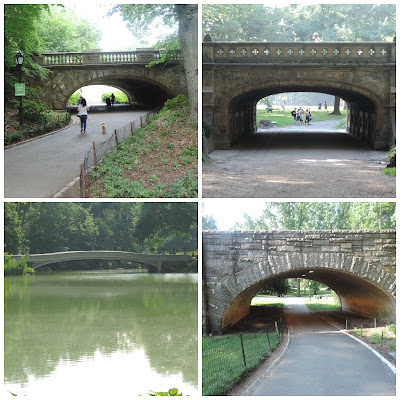 There are 21 unique playgrounds through out the park. We only played on one very early one morning. It was generally to hot most of the times we were in the park. Many of the playgrounds have a water feature. This is adventure playground. It was completely fenced in with a locking gate. By 8:30 am it already had multiple nannies and kids. I was thinking that this was one of the few places in the city where a child could truly run and the parent/nanny wouldn't have to worry about crowds or cars. 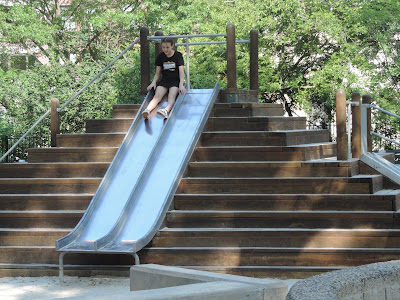 Central Park is a must if you are visiting New York City. It is one of my favorite places to be.