Watching my kids grow is an awesome experience. I love to see them spreading their little wings. One of the places I really am seeing growth in both of them is in writing. We really started concentrating more on writing about six months ago. Don't get me wrong, we had done writing for years, but last year I said we had to see an improvement and really made writing one of the main goals of this school year. We did lots of writing and rewriting for a few months. I started to see a light at the end of the tunnel. Then we decided to start Cover Story. I must say, I saw an improvement almost immediately. The kids just finished their first section of Cover Story, which was to write a review.

They were really struggling to figure out what they were going to review, so I suggested that they review ice cream from a local ice cream parlor. They were delighted and we packed out books up and headed out. I told them each to pick a flavor they had never had before. I suggested they eat it slowly and really look around the store environment. They then filled out their outlines in the ice cream parlor. 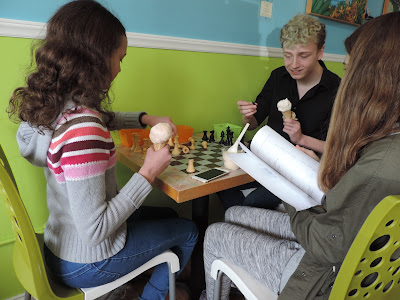 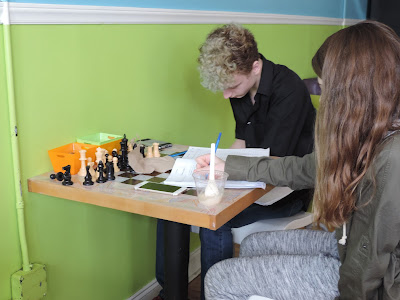 When I arrived at the store, a combination of the comforting interior and pleasant smells filled me with delight. The building was glittering from the beautiful yellow morning sunlight reflecting off the brightly colored wall tiles placed randomly around the floor, walls and ceiling. I walked up to the counter to order my ice cream from a perky, smiling cashier. I ordered my ice cream only after gazing upon the delicious selection of creams below the sparkling, clear glass counter. A few of the flavors were “Champagne Sorbet”, “Grasshopper”, which was a combination of Oreo cookies and vanilla, and “Blood & Guts”, which was strawberry ice cream with bacon sprinkled into it. ~ Dean

The Hop is a bright, happy place where you can find yourself a whole bunch of unique ice cream flavors! The staff are very friendly and will let you sample the ice cream before you decide what you want. One of their most popular flavors is the “Urban Orchard Fruit Salad”. They sell this as an ice cream or a sorbet. I chose this as an ice cream. The flavor reminds me of tart apple cider. The ice cream was very creamy, smooth and delicious. You can choose to have your ice cream in a cup, sugar cone or even a waffle cone. If you bring your little pup, they even have ice cream specifically made for dogs. But the only flavor for your dogs is peanut butter made with Greek yogurt. ~ Anne

They both managed to come up with 300 words and were pleased with their work. That is a win-win in my book!