Weekly Wrap Up ~ Baby, It's Cold Outside!

The weather is playing havoc on the East Coast this week; and here in the mountains, we are experiencing extreme cold, crazy 40+ mph winds, and a freak ice storm. It has been an adventure, but nothing like people closer to the coast are experiencing.

New Year's Eve ~ It was a drizzly day filled with errands. My last errand was a haircut for Anne across town. On our way back, weather conditions unexpectedly changed in minutes, and we found ourselves miles from home on sheets of ice. Everyone who hadn't already slid off the road was crawling at 5 miles an hour. We decided to pick up Grandma and the pizza that had already been called in. We slid a few times but never left our lane or went through any stop signs. I was very grateful for the lessons my northern mother and my professional military driving husband had taught me about driving in snow/ice. When I wasn't praying, I was talking my daughter through all that I was doing to keep the car in the lane. By the end of our journey, she certainly understood the importance of driving extremely slowly, avoiding using the brake if at all possible and coasting over bridges. The rest of New Year's Eve was uneventful for us. We watched movies, played games and ate fun food. Grandma stayed over that night. 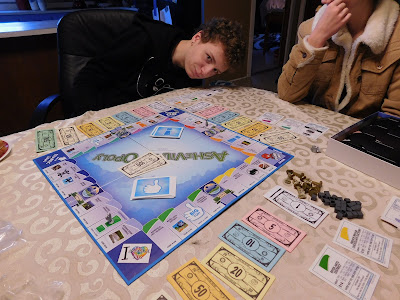 New Year's Day ~ We decided to kick off the new year with a small dinner and game party. Each family member was allowed to invite one family for dinner and games. Due to illness and weather conditions still not being optimal, two families canceled out; but three families came and we had a nice time. We had a baked potato bar with all the trimmings and the kids played lots of games while the adults talked. It was a nice start to our goal to socialize more with our current friends and make new friends. 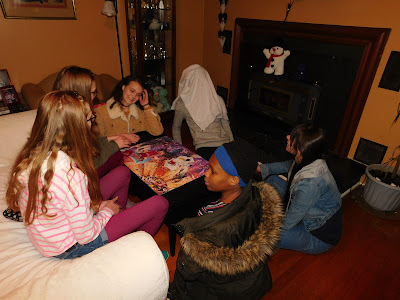 Tuesday thru Thursday ~ We slowly got back into the groove this week. The kids struggled to go to bed by 10 pm and get up before 9 am. We had some appointments, including a lengthy cardiology appointment for our oldest (adult) son who lives with us. He had a good check up but needs a specialized stress test and an echocardiogram. His multiple congenital birth defects and repairs often cause issues in people in their thirties and forties, so they need a baseline now while he's in his twenties. They think his pacemaker will hold out a few more years and maybe long enough for some new cutting edge technology to be approved by the FDA that would make the replacement of his leads less dangerous. I also made a lot of phone calls to fix a snafu with Goldilocks' paperwork for services. The problems aren't resolved yet, but at least the system is hearing from me.

School ~ We did three math lessons, three earth science lessons, and two biology lessons. Dean did two art lessons, plus hours of music practice, while Anne did tons of stretching, dancing, choreography and sign language. We also read several chapters from Great Expectations. We decided that we are probably going to read the most important and memorable chapters from Great Expectations and then watch the movie instead of reading the whole book. Unlike my oldest son, these two kids just aren't academically inclined and don't want careers that require tons of academics. I find that when academics are in smaller chunks, their attitudes are better and in turn they learn better. Even without reading the entire book, they are still experiencing the richness of Charles Dickens' language.

Today ~ I need to make more phone calls and each child needs to do one science lesson. We have plans to go to literature/movie club and see To Kill A Mockingbird later today. Tonight, Dean has art club with his friends. I am sure there will be another game or two played as well. 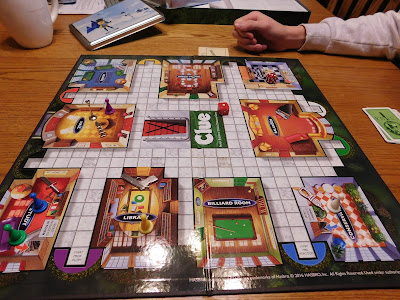