Our Travels through the Midwest

The main focus of our trip through Kentucky, Indiana and Ohio was to explore the Underground Railroad which you can read about here. However, while we were traveling, we visited several other places that were along the way.

Kentucky ~ We visited Mammoth Cave in Kentucky. This is the longest cave system in the world and is a world heritage site.  There are a dozen tours to pick from. We decided to do the Discovery Tour, which was an easy self-guided tour, and the Domes and Dripstones Tour, which was much more intense and went deep into the cave system with two guides (one at the front and one at the back of the group).
The first afternoon we went on the Discovery Tour, we learned the history of saltpeter mining in the caves. It was an enjoyable walk through large cave rooms and was delightfully cold. Our entire trip was during a nasty heat wave, so the cold was very welcome. We spent the night in the non-air conditioned cabins provided in the park. They were a cheap choice, but I would not use them again. My dear husband is still covered in chigger bites. The bugs in our beds, food, and shower were incredible. Two of us ended up playing hosts to ticks. Luckily, the park provided a fridge in the cabin, and I managed to squeeze all of the food we were traveling with into it. Also, as I mentioned there was a heat wave with high humidity coupled with high temperatures -- it was very hot in our cabin. We did have lots of fun cooking out, visiting with the many wild deer who came right up to us, taking photos of the sunset, playing with our Dollar Store glow stick Frisbee and attending the ranger presentation on the history of Mammoth Cave. 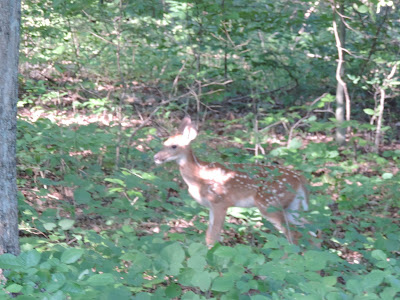 The next morning we had some time before our Domes and Dripstones Tour. We decided to take a half mile hike to an ancient sink hole. We were dripping with perspiration by the time we got back to the top of the hole and it was only 9:30 in the morning. We opted to sit in the hotel lobby for an hour or so and cool off. It was the only place with A/C and an Internet connection so the kids could chill on their phones for awhile. We had planned to have a picnic lunch from our cooler, but it was so hot (notice the theme here) that we bought just enough food to be allowed to sit in the cafe and combine it with our cooler food. All of this was pushing my husband's comfort level, since he is a super rule follower. Sitting in a hotel lobby at a hotel where we were not staying and eating our own food in a cafe was pushing the envelope to him, but it all worked out just fine.

Finally, it was time for the Domes and Dripstones Tour. It was worth the wait. We had to climb down 250 steep, steep metal stairs through very narrow passages. Those of us over 5'4'' had to bend over several times to squeeze through. This was a dry cave tour, so it did not have many beautiful formations like you find in an active (wet) cave. But it was a lovely 54 degrees and our tour guide was wonderful. She even turned all of the lights off for two minutes which Anne loved. Dean preferred the Discovery Tour because it felt safer, and I was glad we were doing this tour when we were still young. Some of the older people on the tour were struggling a bit. It was a completely different world and we got to spend two hours in it. 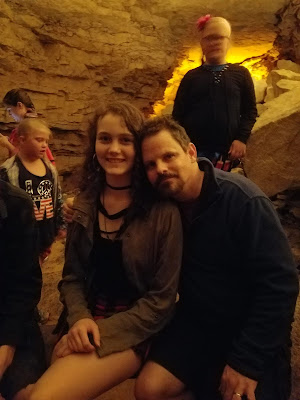 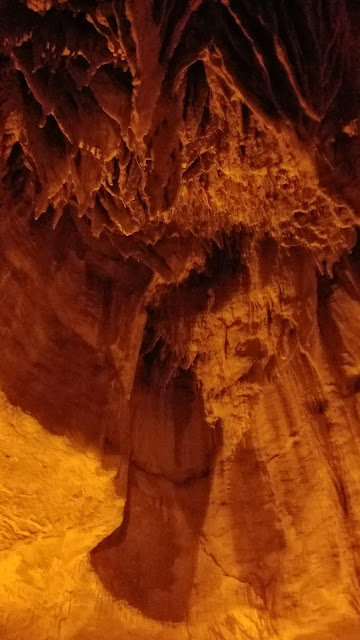 Indiana ~ After we finished the tour, it was time to leave Kentucky and move on to Indiana to spend the night  in Indianapolis. We decided to visit the canal that runs through the middle of Indianapolis and have dinner in a local deli. It started to rain just as we arrived, but that didn't hamper our spirits. We darted from canal bridge to bridge until we found a nice deli. 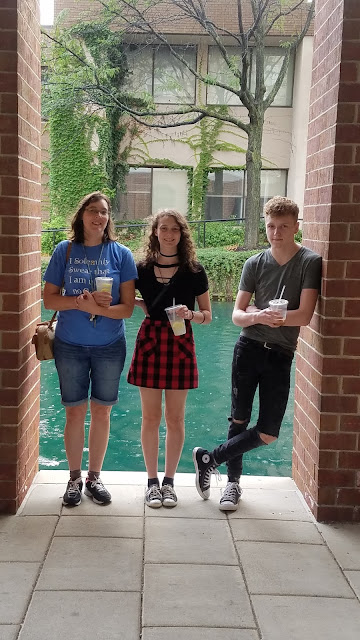 The rain intensified so we decided to take a nice walk around a downtown mall. I hate to admit it, but my kids are complete mall rats. They love to visit malls wherever we go. We don't really shop, but they just love walking around them. After our somewhat harrowing "camping experience,"  we decided to spring for a hotel with an indoor pool for the night, since I found one discounted on booking.com. The kids stayed in it until the pool closed at 11 pm. 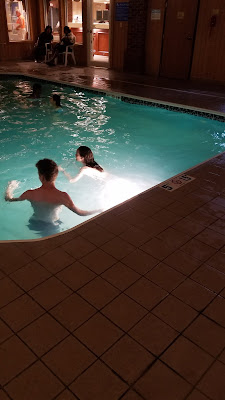 The next morning we checked out a local park before leaving Indianapolis. Holliday Park has a demolished skyscraper from New York City that has been turned into a lovely work of art in the park called The Ruins. The skyscraper was called the St. Paul and was created by the architect Karl Bitter, who also designed the Metropolitan Museum of Art. The St. Paul had three famous sculptures called the race of man on its facade. When the building was demolished, Indianapolis won a contest to have the sculptures and some of the beautiful parts of the building incorporated in their park. 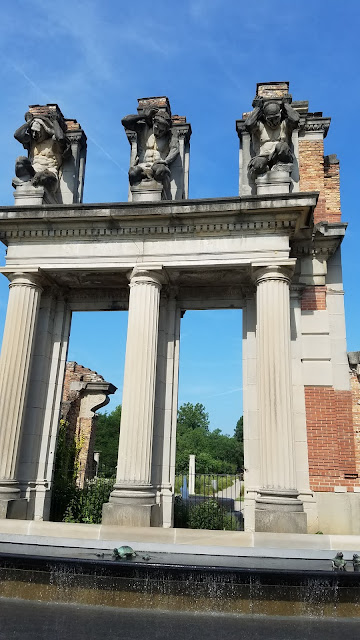 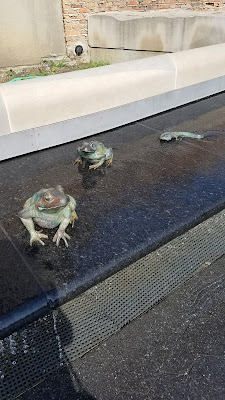 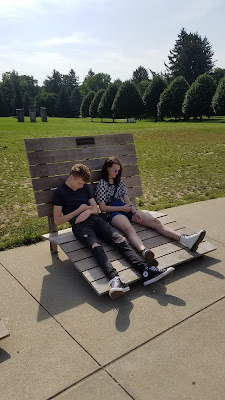 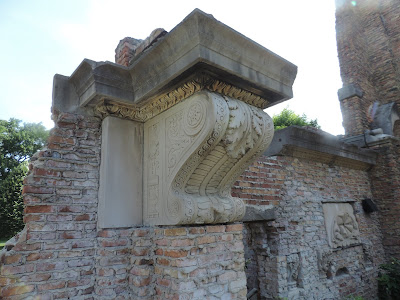 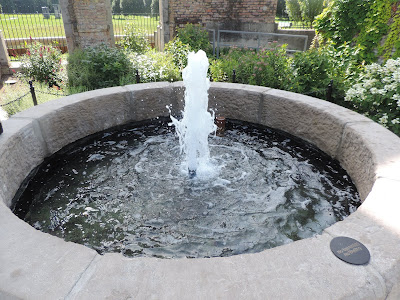 It was another scorcher of a day, so we got back in the car and headed for the Levi and Catherine Coffin home, which you can read about here. We had lunch in Fountain City at the Amish grocery store and deli. If you ever find yourself in Fountain City, Indiana, the $3.75 sandwiches are HUGE and really delicious at this Amish-run deli! The peaches were to die for, too. We bought a whole bag for snacks on the road.

After the Coffin home and museum, we moved on to Xenia, Ohio, where my husband's grandparents and father are from. There is no one left there now, but we took pictures of his relatives' graves and his grandparents' home. 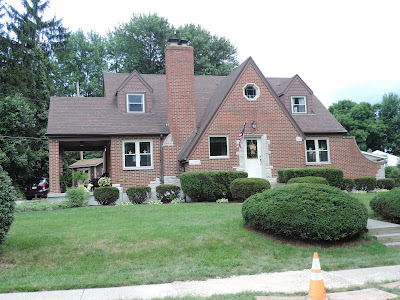 Cincinnati, Ohio ~ By nightfall, we had found our way to Cincinnati, Ohio, where we would stay for the remainder of our trip. We got in so late that we just ate a dinner of pizza and fell asleep. I had planned on us going to a water park while in Cincinnati, but the kids thought it was too hot, even for a water park, plus Dean hates crowds. Since it was the 4th of July, it was bound to be crowded. The kids voted to go to the Cincinnati Museum of Art and see the Terracotta Warrior exhibit instead. They had seen it as preschoolers in Atlanta but, of course, didn't really remember it well. It was marvelous and not too crowded. The entire museum was first-class quality, and we enjoyed a lovely half day wandering the halls and seeing many famous works of art. 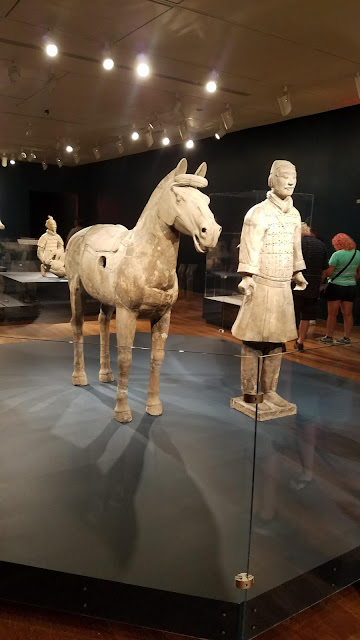 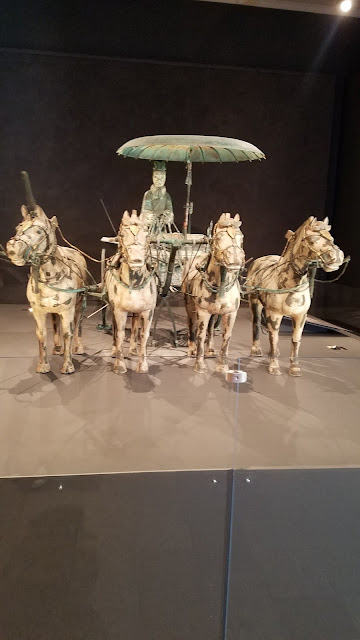 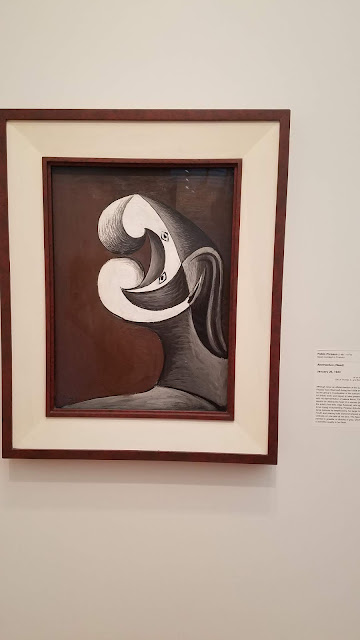 By the time we left the museum, we were starved and headed for another mall. I told you, they are mall rats and the A/C didn't hurt either. We had lunch at The Cheesecake Factory, which was a first for all of us. 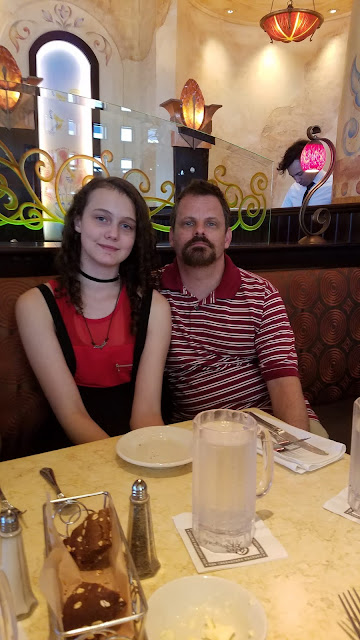 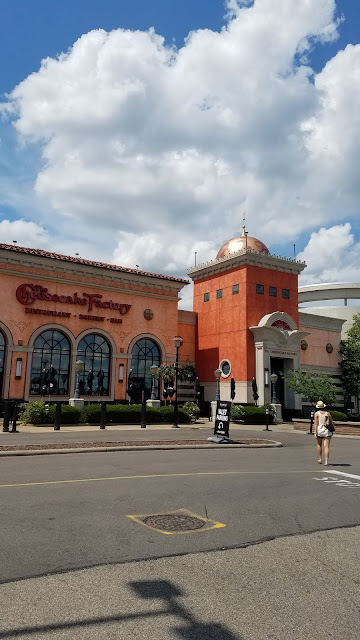 We finished the day off with a long visit with my aunt and uncle, whom I hadn't seen since I was about 18 years old. We had a lovely visit with them. 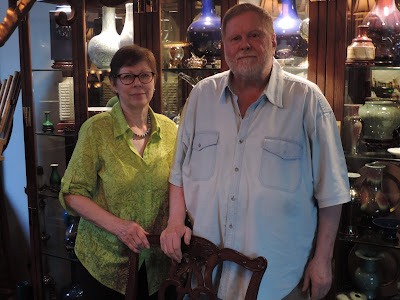 We awoke on our last day in Cincinnati and went back to explore the Riverfront Park, which we had quickly walked through the day before while we waited for the Underground Railroad Museum and Freedom Center to open. It was a lovely park with lots of kid-friendly, interactive things to do like splash fountains, swings and life-size board games. 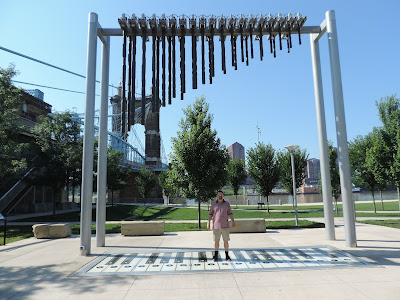 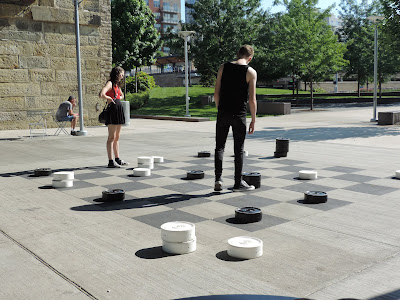 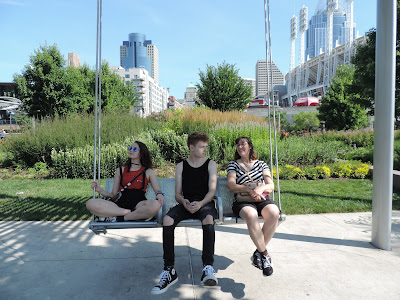 You can read about our wonderful tour of the Freedom Center at our post on the Underground Railroad. It was a great trip. I am so glad the kids are finally comfortable riding in the car for long distances. That piece and eating picnic style most of the time (rather than in restaurants) have dramatically increased our ability to travel farther from home.

Blessings, Dawn
Posted by Dawn at 8:06 AM