I just needed a little blogging break last week. There was nothing bad going on. I just had no inspiration to write. It is almost time for the Spring show, The Mystery of the Seahorse. Anne is working hard and putting in lots of hours at rehearsals. She had a tiny emotional breakdown one morning this week worrying about her Cecchetti exam. I reminded her that there was lots on her plate right now which can feel overwhelming and that no matter what happened we were proud of her for working so hard on her dreams. My girl has 10 shows (in two different productions) and a Cecchetti exam all in the next three weeks. It is a ton of pressure and she handles it all so well the majority of the time.
School is wrapping up day by day. Three math workbooks were completed this week between the two of them. Dean only has review worksheets to complete before end-of-year testing. He will also complete his World Geography course next week. It is nice to have a bit more free time to get other things done -- such as yard work. Anne is plowing through the three courses she was behind in. At the rate she is going, she may finish by mid-June instead of the end of that month.
I picked up a brand new Tinker Crate at a consignment shop this week. Dean put it together in no time at all. This particular crate was all about chaos theory. 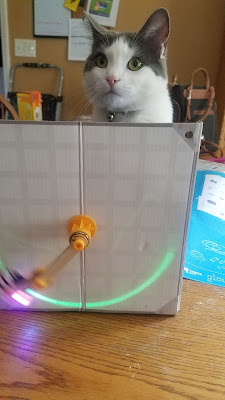 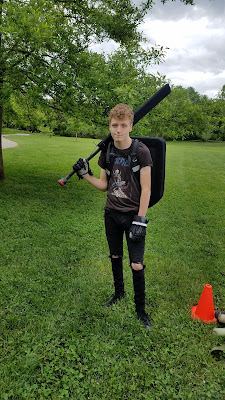 I took this crew to Starbucks this week. They are such a silly and sweet group of teens. Gotta love teenagers! They did have one difficulty at the mall this time. They were playing a game of their own in the mall and unwittingly marched through the middle of a group of about 12 to 15 hooligans (keeping about a eight foot distance from anyone). (I am calling that group this because I had seen them climbing on vending machines and catcalling and being very loud. However, my group hadn't noticed them.) Before they knew it, a teen girl was shouting in Dean's face, accusing him of trying to hit someone and he was being surrounded and trash talked by a group of boys. His sweet girlfriend stood next to him while he tried to talk calmly and sensibly to the group, but they weren't having it. I was sitting about 20 feet away and marched into the middle of the circle to intervene. I was raised in an inner city high school, and I know all too well how this level of posturing and trash talk can quickly escalate. Fortunately, they didn't want to tangle with a middle aged mama suggesting calmly that we call the mall and city police to come and help us settle this issue. While they were digesting my suggestion, I moved my group quickly out of the area. It took us about two hours to process the whats and whys of the incident. My homeschool crew is totally not familiar with not being able to resolve things with a simple "sorry, it was a misunderstanding" statement. The two in our teen group who are public schooled were very familiar with the escalation but still had plenty of trouble figuring out what went wrong. Basically, what went wrong is that the hooligan group was looking for trouble and my group wasn't paying attention to their surroundings and giving the hooligans a wide enough berth. I imagine my group's misstep is why some say kids need to go to public school to be "socialized". However, positive and negative socialization comes in many forms all the time and in many places. 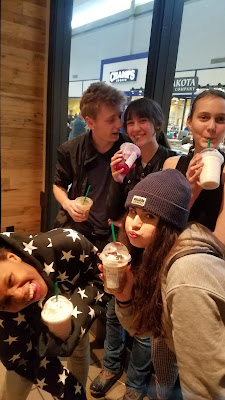 Anne continues to LOVE her job. She can't wait to get there each day. Here she is tagging clothes for sale. 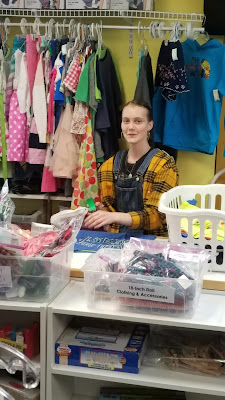 The guys and I had a lovely walk at the bird sanctuary one day. As usual, we saw lots of wild life and very few birds. We saw one woodpecker and heard lots of birds. We also saw many turtles, squirrels, butterflies, and dragonflies. We found a very muddy part of the path. Dean didn't want to get his shoes muddy, so Tim ferried him across the mud piggyback style. They crack me up. 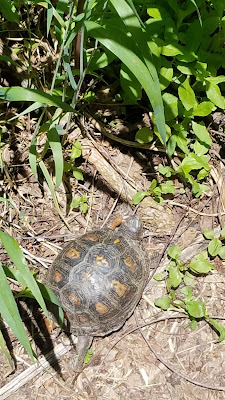 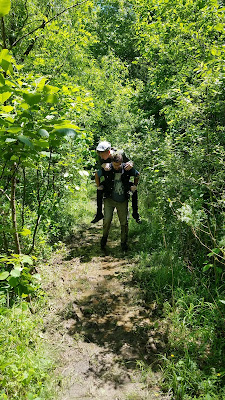 We finally made it to a cafe that specializes in poutine. This was a fun, ethnic dish to try out. It is a dish from Quebec, Canada. We had the traditional dish and the local dish with pulled pork and mac and cheese. We liked the local dish better but completed eating both dishes. It is fun to try new things. 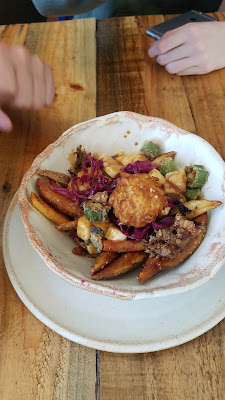 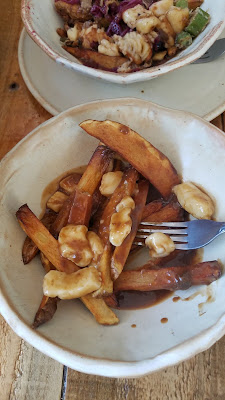