We are done with our first five weeks of school! I am so pleased with our school year thus far. I have already seen some great improvements in areas. We are even still on schedule, although that does not completely matter. As with every year, there are subjects that haven't been covered as well as I expected, but they haven't been dropped completely...yet! We have only covered one lesson in our Bible study with Draw to Learn the Life of Jesus. That is okay. We will plug along slowly. We also did not start our foreign language studies yet. I do plan on starting Little Red Riding Hood in French during our next five week period.

We celebrated our first five weeks with a unit review. We invited Grandma over for dinner and showed her all that we are learning. It was a roaring success and we will do this at the end of each five weeks this year. We started the evening with everyone ordering their dinner choices at the Pig in the Blanket diner. The diner was created by the kids and modeled after the diner in the book we read called Frank and Ernest. The kids learned diner language and as each person placed their order the kids called it out to the short order cook (me) using diner terminology.

Here are a few of the choices in our diner ~ 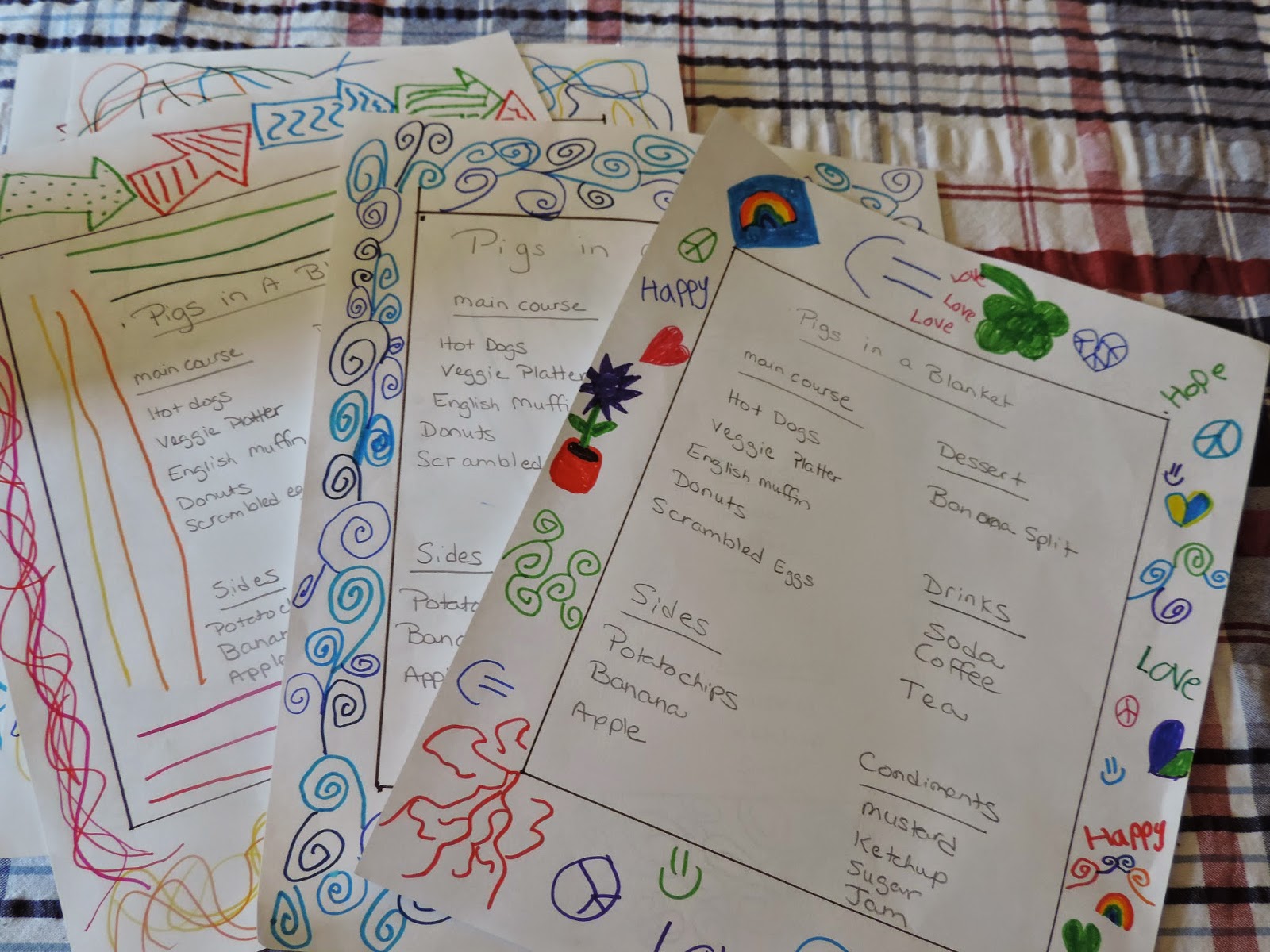 After placing their orders, everyone sat down to listen to each child give a presentation on what they had learned through the previous five weeks. Tom Sawyer went first. He read his 460 word essay on Sadako and the One Thousand Cranes.  He told us a little bit about Hiroshima. He then showed us all of the origami he had made. He has really gotten into folding paper and made many little figures. Lastly, he told us about the Lego Club that both children will be continuing to attend this year. Little Red Riding Hood went second. She read her 462 word essay about the Melendy children from the story, The Four-Story Mistake. This book is second in the series of the Melendy Quartet (first in the series was The Saturdays). She then showed us many of the crafts she had made through the previous five weeks. Lastly, she talked about the Tar Heels Junior Historic Club that the kids are joining this year. 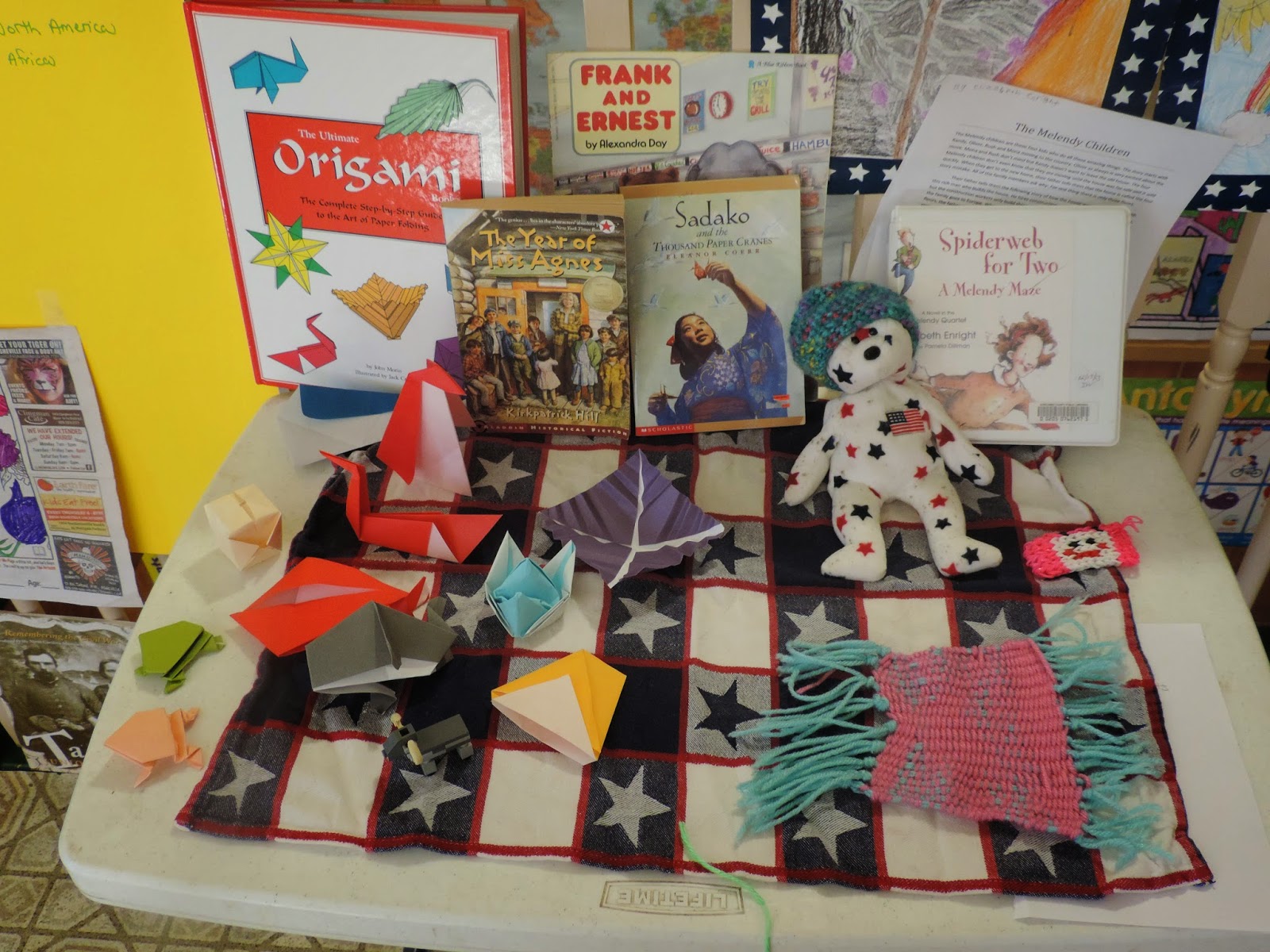 We sat down to our diner meal and continued talking about all that we had learned. After dinner and a short outdoor break, the kids showed their geography skills which is a troubled spot for both of them. Little Red Riding Hood, in particular, has a lot of learning to do in this area. We will be working hard on writing and geography this year. I am happy to see the vast improvements that Little Red Riding Hood has made in writing in such a short time so far this year. We also did a very short multiplication drill and the kids went through their notebooks with Grandma.

We had one other grand accomplishment this week ~ we were able to bring down a dead tree at the end of our driveway. We had wanted this tree to come down. However, it was entangled with phone wires, and we could not afford the prices we had been quoted to chop it down. To our good fortune, our neighbors were having a tree chopped down this week. While they were out at the neighbor's home, the lumberjacks asked if we would like to have this dead tree come down. They offered to do it at a fraction of the cost that we had been told it might cost. So we had it done because, every time there's been a storm, we've worried about whose car might be crushed by the tree. What a relief!

We have a week break now to prepare for our next period of study. We are completely done with World War II, much to the kids' relief, and will be moving on to another time in history. I will be busy this coming week getting Goldilocks enrolled in public school. She will be attending an intensive mental health program in our public school system. I hope it gives her the support she needs. There are 18 kids to 8 adults so there should be plenty of line of sight. We shall see.
Blessings, Dawn
Posted by Dawn at 5:24 AM