Dean had another fantastic year at day camp. This year the theme was Ancient Greece. He spent two weeks (60 hours) learning about all things Greek. His favorite parts were playing all of the games, making a sword, climbing ropes, making his helmet and learning stage combat. He is gathering quite a collection of stage weapons from all of his years of camp. (Each year has a different theme, such as last year which was Vikings.)

He now has two metal swords, a battle-axe, a shield and multiple masks. They design their swords on paper and then take their templates to a welder who cuts the swords out of metal. The swords come back the next day and the kids sand the swords down so that they are dull. Then, they cover the handles in leather.

This camp is such a great experience for Dean each year. He learns so much more than stage combat and acting. He learns self control, team work, obedience, craftsmanship, creativity, growing confidence, endurance, compromise and so much more. He gets wonderful opportunities to role model to the younger campers and to spend ample time with one of his main male role models (Giles, the director). 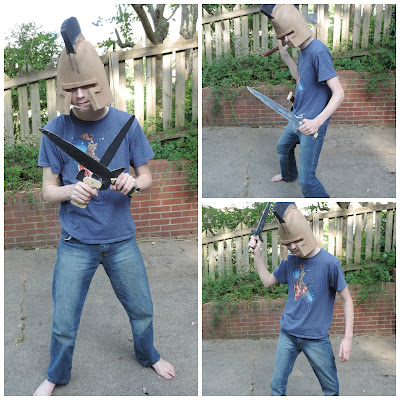 Blessings, Dawn
Posted by Dawn at 4:54 AM