Our 18th year of homeschooling has come to an end. We have completed our state's requirements plus so much more. However, there was a glitch with our testing and it hasn't arrived yet, so I will have to reopen school when that comes in. Also, Dean still has tons of work to do on his mural over the next few weeks so he will still be doing lots of art with Miss Laura. He loves art, so that isn't really work to him. Over the summer, we will be doing a few review products, and Dean will be keeping up with a little bit of math on most days. So our days will be much more relaxed, but still filled with learning.

The Mural Project ~ These three students each have a mural they will be painting for display next month here in our little city. They are laying down a grid on each large canvas board so that they will be able to transfer their drawings onto the mural boards.

Performing ~ Anne and Dean have completed five out of eight shows of The Little Mermaid. They are both generally pleased with their performances. I have taken only a couple photos of them. Dean really hated his costumes and didn't want either of them shown. Anne is the princess in The Little Mermaid, and Dean is the priest as well as "dark water" during the storm that drowns almost everyone on board the prince's ship. It was announced this week that Dean made Junior Company and will be joining his sister next year. That means two kids in full Junior Company. There goes my bank account! We are so proud of them. They both work very hard to be accomplished dancers.

We finished off the year with an ice cream party. For years, the kids have been eyeing the Mammoth Sundae at the renovated Woolworth counter. It comes with 10 scoops of ice cream and 10 scoops of topping. Unfortunately, after buying it, the kids decided it was mostly gross! We won't be doing it again next year. However, it was an experience to remember. They only ate a little bit. The kids are used to much healthier food most of the time. Even the ice cream they usually eat is organic. 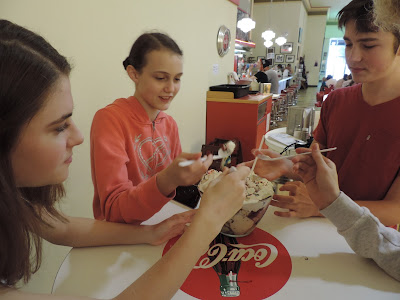 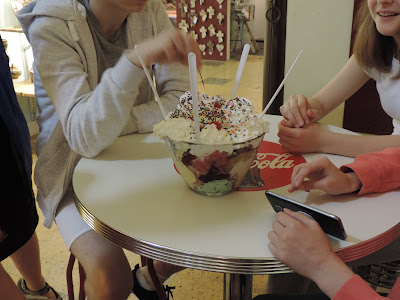 We also watched the movie, The Giver.  It was excellent. It has been on my movie list all school year, so I'm glad we finally got around to watching it. Now, I just have to slip in watching Holes this summer.