The Story of Our Holiday Table Setting

The story of how I came to own crystal and china is a funny one. I really didn't want china or crystal on my wedding registry. I didn't see the point of asking others to pay for such expensive things that we would rarely use. My future mother-in-law and my boss at work saw it differently. They felt that I was marrying into the military, and an officer's wife would need china. We went around and around until one of them threatened to find the most hideous china set and put it on my registry. With that threat in mind, I went to the store and asked the clerk to show me the least expensive sets. I figured if I was going to have china, I wanted china that we could enjoy without fear of breaking it and guilt that someone paid an arm and a leg for it. She showed me three lovely sets that were all under $100 a place setting. I picked the Lenox Alyssa set. To my amazement, people did happily buy the china and crystal. We ended up with eight place settings and a few serving pieces. We also received a few goblets. As it turned out, I never needed china in the military. Lieutenant wives were not asked to entertain in that way. Lieutenant wives were in charge of bake sales, family style parties for the entire company and taking meals to families that were in stressful situations. The high ranking wives did have and use their china for parties...lots and lots of china. They threw the company Christmas party just for the spouses and glamorous adult only parties that required evening attire. We are talking about 50 place settings of china or more. Phew! I assume that they rented it, but who knows? Fortunately, I never needed to learn. 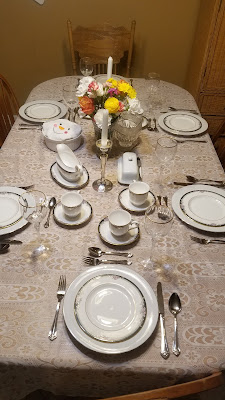 We have enjoyed our china in private life and I don't regret having it at all. My philosophy is to only have things that you love and use. We have always used our china and crystal. Even when our children were three and four they ate off of the china during the holidays. The use of crystal goblets followed within a year or two, once their little hands could grasp the cup. Remarkably, we have only lost one crystal goblet over the last 21 years. We have been careful with our china but certainly not perfect. Even careful children are bound to bang the plates with the goblets when they are trying to put things back down. Everything else has survived in excellent condition. I have a feeling that my choice of picking less expensive bone china also proved to be stronger bone china...Ha! The children love it when the china comes out. They love to help set the table and decide which pieces we will use this time.
We went all out this year. We decided to use plain gold and white dinner plates instead of the Alyssa ones. A dear friend gave them to us years ago. Then we added the Alyssa salad plates, teacups and saucers. We had just enough fancy silverware to add dessert and teaspoons above the plates. After consulting lots of table settings on the Internet, the kids wanted those put out. 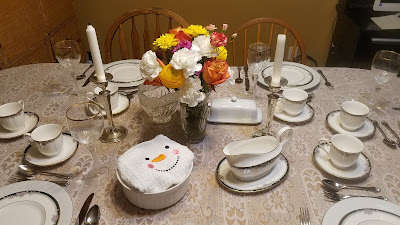 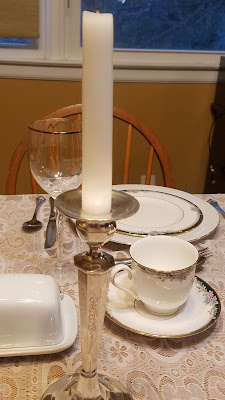 As the years have gone by, we have wanted to add serving pieces, but we were not willing to purchase from the Alyssa collection. The pieces are too expensive for our budget, even on eBay. So we have added neutral white pieces to the table, such as the butter dish and the bread bowl (with the brand new snowman towel). The candle sticks are a family heirloom that were my great grandmother's. I think mixing the old and the new, the formal and the casual together creates a more warm and comfortable atmosphere. 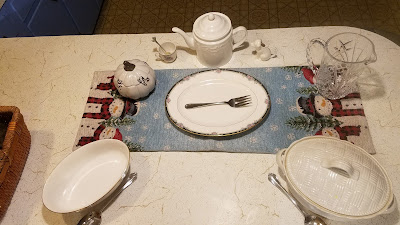 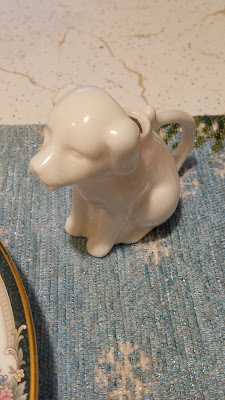 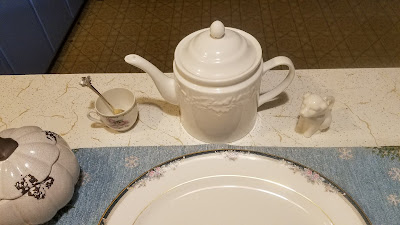 The counter holds the things that would not fit on the table. Everyone will go to the counter for their meat, vegetables, tea and soda. The little creamer dog adds whimsy and was picked up on our trip to Charleston. The teapot and water pitcher were gifts from my kids. A tiny teacup serves as the sugar bowl.

We have not pulled out so much china some years. The glamour and volume of china on the table has depended on our level of crisis in the family. Some holiday meals only had enough margin for teacups, saucers and dessert plates. Apparently, we are doing well this year, because we pulled out everything from the cupboards but the dinner and dessert plates.

A final note to make you chuckle ~ My son Dean has always had strong feelings about decorating the table. He loves it and wants everything just so-so. In another lifetime, he could have been a butler. I am surprised he doesn't make us measure the distance between plates. We only have enough matching cloth napkins in light pink. He absolutely hates the napkins, even though he picked them out years ago. He thinks they look to much like spring and can't be on a fall/winter table. So we put them on the chairs this year so as not to offend his sensibilities. LOL! 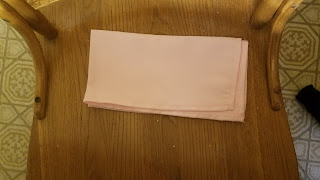 Have a wonderful Thanksgiving weekend.

Email ThisBlogThis!Share to TwitterShare to FacebookShare to Pinterest
Labels: Family Funnies and happenings