We are wrapping up our study of the Vietnam War today. I decided to only spend a week on the Vietnam War, because my crew gets war weary real fast. We are not at all war history enthusiasts around here. So we have read a few books, watched a short documentary and today will be watching Good Morning,Vietnam. I think this film has just enough war scenes to get the point across and is interesting enough in other ways to keep them focused. It is rated R, but they are 16 and 17, so I decided it was watchable, as long as I am sitting with them.

For a hands-on learning experience, we decided to explore and taste a military MRE (Meal Ready to Eat). I bought an MRE from a military supply post. While most combat individuals during Vietnam had C-rations rather than the more modern MRE, this was as close as we could get to a meal that a soldier in the field would have eaten. (A C-ration is a prepared and canned wet combat ration intended to be eaten by military land forces when freshly prepared food is not available in a field kitchen or mess hall.)
We opened up the MRE and were very impressed with how many things were inside the square bag. It contained the following:

It is important to note that water was not provided so to truly be able to enjoy the whole meal, soldiers would need a water source plus purifying pills for that source. 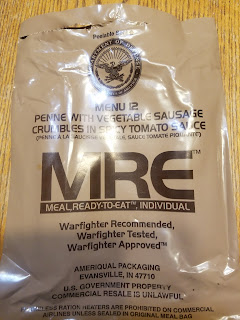 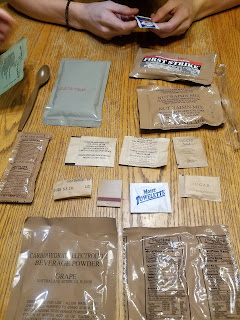 My husband served in the military for more than 10 years and thought that the MRE we had was better than he remembered. We were not convinced and made lots of jokes about how he is known to eat just about anything. This is what Dean thought of the taste of the energy bar. 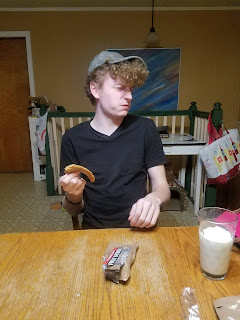 The kids and I were amazed by the chemical stove. With just a bit of water added, the stove bag got very hot. It was hot enough to warm the main course and coffee and still be steaming for about 20 minutes. 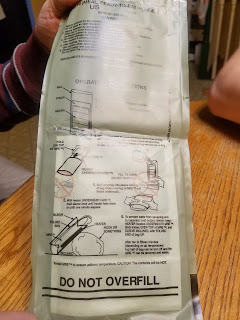 We liked the nuts and raisins the best. Everyone thought the main course tasted like Spaghetti O's, which isn't a favorite around here but was at least recognizable. (I somehow missed getting a photo of the main course.) 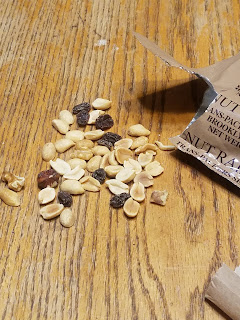 The coffee brought back memories of that song by Pete Seeger, Gee, I Wanna Go Home. The grape drink wasn't much better. It was in fact, blue and tasted just like a frozen electrolyte popsicle. 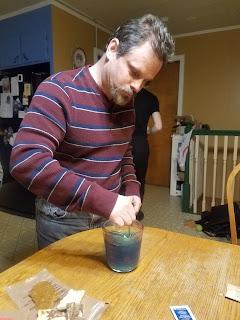 Dear Husband taught Dean how to use paper matches and light them with ease.

It was a good hands-on way of being able to relate to how the combat soldiers were able to eat during the Vietnam War.