Easing into Our New School Year with a Field Trip

There has been much planning going on around here. I am filled with thoughts for next school year, but I am not completely ready to share them just yet. One thing felt certain as I started firming up our plans...we had too much to do! I decided that we needed to start one subject early and asked Tom Sawyer and Little Red Riding Hood which they would like to concentrate on first. They wanted to start with art. Our first quarter of art this year will be concentrated on architecture. We will be touring our own downtown and studying the many historic buildings. We are blessed to have coloring books of many of the more famous buildings in our little city that was put out many years ago by our preservation society. Plus, we will be studying Frank Lloyd Wright, because he is of great interest to my budding architect. Tom Sawyer. Since Goldilocks is at day camp this week and will not be doing the same lessons as Little Red Riding Hood and Tom Sawyer, it was an ideal day for a field trip.

We decided to take the historic trolley tour in our city to have an overview of all of the great architecture. We had never done the tour before and it far exceeded our expectations. A huge part of the tour was all about architecture. What a perfect introduction to our art lessons! Of course, we have seen these buildings and homes many times but didn't know much of the history behind them. I had trouble catching good pictures in a moving trolley so forgive me ~

We saw a row of Sears Roebuck kit homes.

Then there were the lovely Queen Anne homes in our most historic neighborhood. Our city became known as an ideal location to heal from tuberculosis and by the 1920's boasted 25 clinics that specialized in healing patients. Many homes in this historic neighborhood were converted into boarding homes to accommodate the families of patients at the clinics. 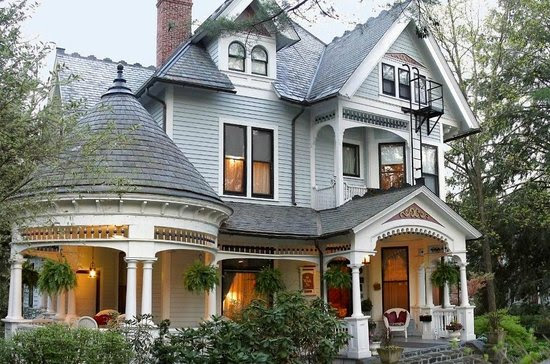 We learned about the first skyscraper in our city (and still the second tallest building). The neoclassical Jackson Building comes complete with gargoyles. I've been in the law office at the top of this building and the views are stunning. It is also considered the most haunted building in our city, because 13 men jumped from this building when the Great Depression started. Much to our horror, we learned that, when the brickwork was redone years ago, a bull's eye was placed to mark the spot where the men fell. I think that is a bit sick and gross. I copied the picture of the bull's eye from another website.

We also saw a modern building designed by the internationally famous architect, I. M. Pei. When this huge building was built in our city square, many residents were upset. However, it gained popularity when everyone realized that the famous Jackson Building was reflected in its windows (as you can see in the picture). The windows reflect the sky and remind visitors that our city is nicknamed the "Land of the Sky".

The beautiful home shown below was once part of the Highland Mental Health Hospital complex. Tragically, Zelda, known as the Jazz Age High Priestess and wife to F. Scott Fitzgerald, plus eight other women were killed in a fire that engulfed the hospital in 1948.

We rode past several examples of French chateaus. The photo below once was a very large private home but is now many condominiums.

We also saw one of the two "castles" that our fair city claims. This one was built by the owner of that famous insane asylum I mentioned above.

The tour guide told us about different kinds of building materials used in the various buildings. I hadn't heard before about pebbledash, which consists of plaster mixed with either pebbles, sand, gravel or shells. The photo below depicts a pebbledash building.

The tour also went by the famous Grove Park Inn. This hotel was fashioned after a western hunting lodge and has hosted many well-known people. While I had heard of the many important people, including presidents, who have stayed at this inn, our informative tour guide told us of two people that the children and I hadn't hard about -- Al Capone and Albert Einstein.

The kids learned lots and enjoyed their first day of art. We will be going back to study these buildings again, plus many more over the next few weeks. There are so many wonderful details to discover!

Blessings, Dawn
Posted by Dawn at 4:17 AM