Week 20 ~ Photography, Astronomy and Not Buying It

Artist Study of Dorothea Lange ~ We finished an artist study of Dorothea Lange this week. We studied many of her photos from the 1930's to the early 1950's. We used the books Restless Spitit The Life and Work of Dorothea Lange and Dorothea Lange Looks at the American Country Woman. We talked about staging a shot versus candid shots. We talked about how a picture is worth a thousand words. We then looked at famous portrait photos from other photographers using the book, Life Faces. Some of the photos were candid and others were staged. I then challenged the children to take their own staged photographs of each other. I asked them to try to catch an emotion in their pictures. Once they were pleased with their creations, we loaded them to Photobucket and turned them into black and white or metropolis. Here are their results.

This picture was staged and taken by Goldilocks (13) of her sister. She was trying to get a sad or reflective look.

She also staged our dog, Lady, getting into the recycling. She wanted the edges of the photo darker when we edited so the picture would look more like a scary or mysterious photo.

Tom Sawyer (11) wanted to catch a picture of his sister being contemplative. He set her up holding a wooden apple.

He also staged this shot of kids peeking through a doorway. However, he wanted to be in it, so Goldilocks took the picture with much directing from Tom Sawyer.

Little Red Riding Hood (10) wanted to catch her brother in a shocked pose. She put her reading glasses on him and made him pose with a "girly" book.

Astronomy ~ We finally got underway with our study of astronomy. We read the first chapter in our books, Real Science 4 Kids Focus on Middle School Astronomy and Beyond the Solar System Exploring Galaxies, Black Holes, Alien Planets, and More. The children learned the difference between Geocentric (earth at the center) and Heliocentric (sun at the center) solar system theories. Then then drew what they had learned and narrated the information back to me. 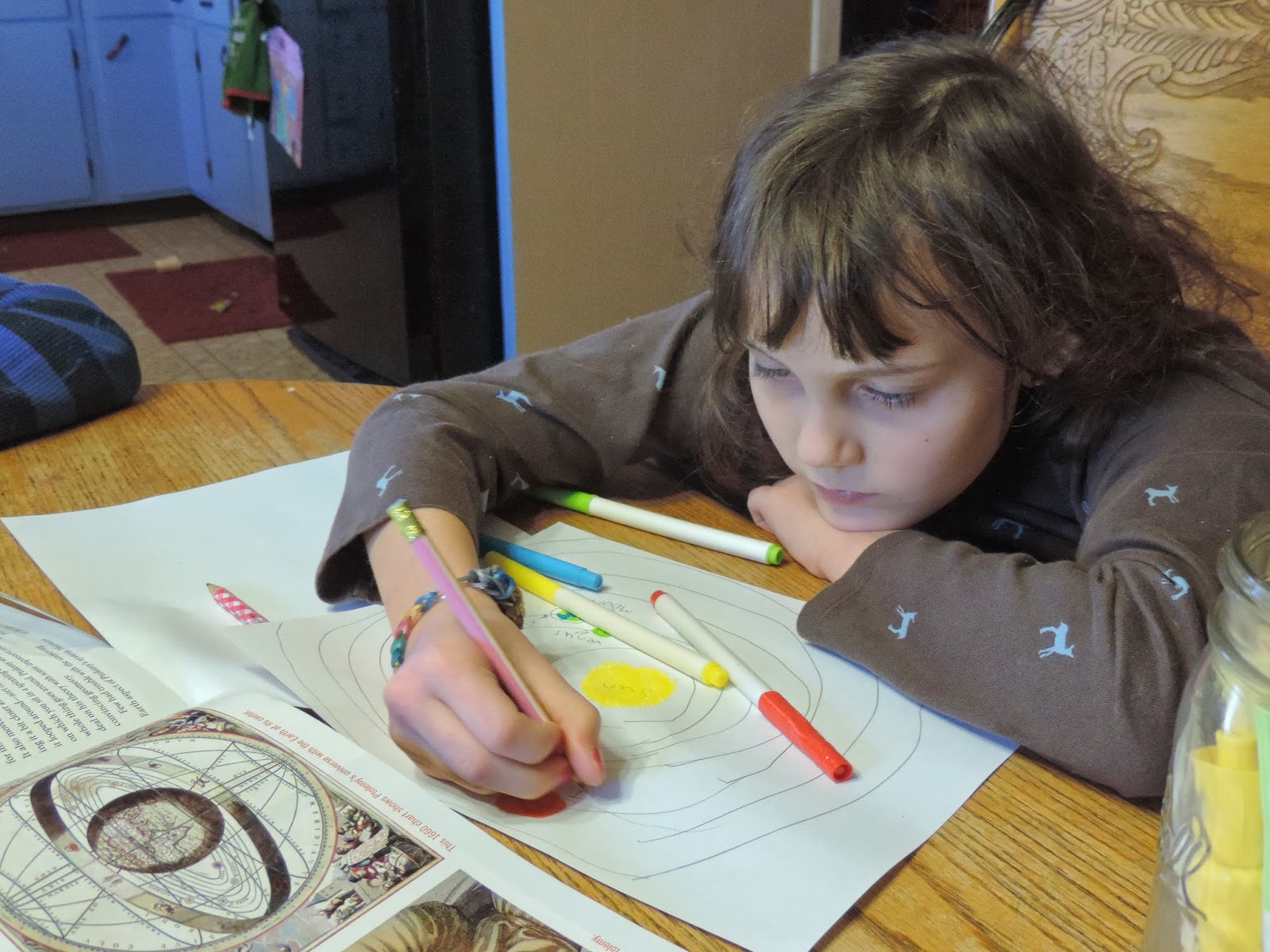 The kids then went out to look at the night sky with Daddy and found the North Star, the Little Dipper and Orion through our telescope.

Not Buying It ~ I added $10 to my gas tank and spent $90 on food this week. Other than paying our bills not another dollar was spent!! I am very much looking forward to payday on Friday. There is hardly any food left in my home and both of our cars need gas. However, we had good meals all week and no one went hungry. We ate homemade soup many nights and used meat as a flavoring. I kept up with making things from scratch or making do without this week.

Things we fixed this week:
The Rest ~ We have a very busy schedule starting Friday. It will be interesting to see if we can avoid buying food out on the road. I have spent much of my free time this week exploring the video option on my new camera. I can figure out how to make videos and download them to the computer. But when I try to upload them to blogger it takes forever and I keep giving up. Does it really take 20 plus minutes to upload a 40 second video? Does anyone have any ideas how to get the video on here?

Blessings, Dawn
Posted by Dawn at 4:20 AM