I did a small unit study with the children over the past week or two on the Harlem Renaissance. I focused on poetry, history and music. My Mother focused on teaching the kids about the art of the Harlem Renaissance.
Poetry
I used Poetry for Young People Langston Hughes as our main book of poetry. We concentrated on the poems Mother to Son, Homesick Blues, Merry-Go-Round, Still Here, Harlem, and I, Too. 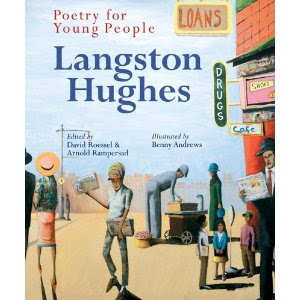 I have always enjoyed Langston Hughes. I think the layers of realism and symbolism are pretty easy to understand. My kids enjoyed figuring out the different emotions in the poem Harlem. We read each line and put an emotion to it. For instance they thought the first sentence expressed the emotion of sadness or worn out and the second expressed pain. The third sentence was anger, the fourth was happy and the fifth was exhaustion. During our poetry tea, we focused on descriptive language in poetry. Langston Hughes does an excellent job of painting a picture for our minds with his descriptive words.

BY LANGSTON HUGHES
What happens to a dream deferred?

Does it dry up
like a raisin in the sun?
Or fester like a sore—
And then run?
Does it stink like rotten meat?
Or crust and sugar over—
like a syrupy sweet?
Maybe it just sags
like a heavy load.
Or does it explode? 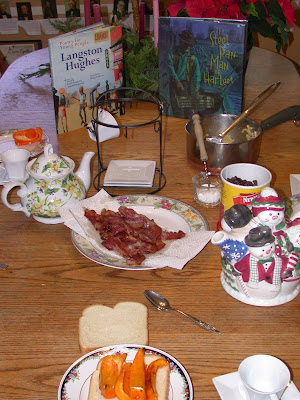 Music
For music we read several picture books on the Jazz and Blues Age and concentrated on Louis Armstrong, Duke Ellington, Billie Holiday, Ella Fitzgerald, Bessie Smith and Dizzy Gillespie. The songs we focused on were What a Wonderful World, Hello Dolly, Salt Peanuts, A Night in Tunisia, Cry Me a River, Summertime, Tain't Nobody's Business If I Do, St. Louis Blues, It Don't Mean a Thing, Take the A Train, and many others.  They liked Duke Ellington the best overall. He sure made some great dance music. 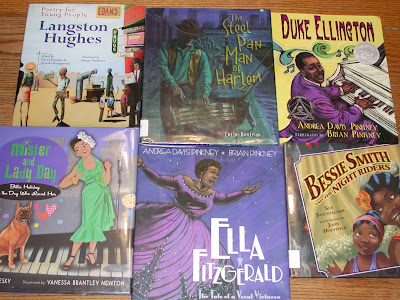 Art
My mother focused on Aaron Douglas for our artist study. We looked at several works of art and studied the simple, straight lines. We noticed that he did not put faces on most of the people, but instead made silhouettes. Grandma reviewed the poem, Merry-Go-Round, by Langston Hughes, which has lots of images. The kids then illustrated the poem just as Aaron Douglas illustrated many of Langston Hughes' poems. Here is their art work:
History
We discussed how conditions were excellent for the birth of the Harlem Renaissance and reviewed why so many African-Americans were moving to northern cities. We reviewed Jim Crow laws and the dangers of living in the South. However, we discussed that things were not that wonderful in the North, either. We learned that even though African Americans were being recognized for their music and art, they still were often segregated. There were even clubs in Harlem that were for only white patrons even though the performers were African-American.
There was so much more that we could have done with this study. For instance, we did not study the many dances of this time period. However, we are out of time for now. We need a break from school and some time to embrace Christmas.
Blessings, Dawn
Posted by Dawn at 5:49 AM