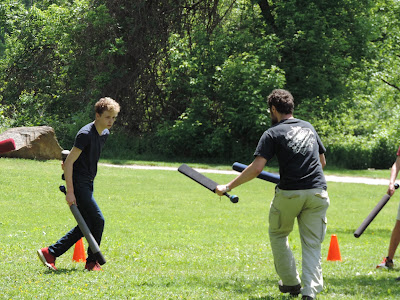 Elijah spent his third year in physical education doing 145 plus hours of Belegarth Medieval Sport. He continued to attend adult and teen games on Sundays and added focused classes on Monday nights. He advanced to being a member of the adult competition group in our area called the "Valley of Ashes". He had the opportunity to attend a day festival in our area with them and a weekend festival in South Carolina. He also had the opportunity to be a camp counselor for a Belegarth children's camp for two weeks, where he taught many skills in sword play, as well as skills in self-control and compassionate battle.

He earned an A for his final year of high school physical education.